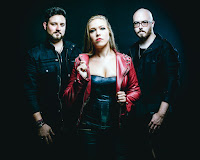 Band: VARNA
Place of origin: Los Angeles, California, USA
Genre: Hard rock, pop rock
Lyric Video: The Craving
Produced by: Erik Ron
Release date: January 8, 2019
This morning the air is heavy with anticipation as I tear through my house cleaning and planning for being trapped here for at least 48 hours with a reported ‘snowpocolypse’ poised to wreak havoc on my small, seaside enclave. So to distract and entertain myself, I flip through FB messenger to check out a video Dave Wolff sent me a few days ago. It’s an offering called ‘The Craving’ by Varna, a three piece group from LA. It’s one of those ‘Lyric’ videos, you know the deal, just creatively flashing the lyrics over some jazzy background while the song plays. The song’s not half bad for a hard rock albeit pop tune, but if I’m basing my comments on the video and not the song itself I have to say ‘meh’.
The lyrics while evocative they don’t really stand on their own and the driving music begs for something more interesting to watch. As I’m watching I think ‘well maybe this is an older person (such as myself) who may not want to put themselves out there as the star of a sexy video’. I go to check out their website. I learn Varna not only sounds good, hell, they look good too. Huh.
So what gives here? The song is recorded at fevered pitch and there’s no really break in the energy. It seems to me like it’s all pinned to the red. Which is a thing these days; I understand. There’s a machine gun quality to the drums which, if you know me, you know I love that. I want everything to sound like a freight train going off a cliff. Mind you, I said ‘freight train’. A low, fast, chugging, behemoth in a sure and steady acceleration towards certain annihilation. Not a monorail on a thin track racing people at 300 mph to most likely get them to work. This isn’t a dig, really, cause I get what’s going on. This is a good tight band, they have a lot of buzz and have been getting a lot of accolades, rightfully so. And that’s awesome. Also they are palatable - making hard rock acceptable for the buying public. Again kudos. I just like a little more metal in my metal. There’s a facade here that I want to break through. But there’s no real payoff here - the train ambles into the station and we are left feeling - is that it? Was that the ride?
Now the good stuff. Lead singer Tiana Woods lists and eclectic group of influences - and right on. Cause we all have people other than Phil Anselmo in our stable of reasons why. (I just watched Miley Cyrus do her thing at that Chris Cornell tribute - holy baby Jesus that was a little bit of alright). To my ear she’s a modern day Pat Benatar - who, you will remember way back when, played as hard of rock as pop music got back in the 80s. Ms. Woods is smooootthhh and powerful - two attributes hard to come by these days. She’s a total pro. There’s no BS here. Also, she’s singing about her own sexual desire, unashamedly and unabashed and as well she should. I know I’m late to the game in this - but women have wants and desires and for too long have masked them in the ‘I want him to love me I want him to be my guy’ thing when really it’s more about lust than love. In the Dead Weather song ‘Gasoline’ Alison Mosshart sang ‘I don’t want a sweetheart, sweetheart. I want a machine’. She’s a woman singing the single entendre as good as Bon Scott... Ms Woods gleefully does the same here.
However I feel this provocative and empowering message gets lost in this song. As I said the fever pitch, lack of nuance, pop sensitivity along with a track void of musical deviation wears the listener out. Especially when there’s no awesome band to watch kick it out - just the lyrics. Had they coupled the lyric style with a performance and/or storyline video you could have an attention and ball grabbing film here. But as it stands - it’s lacking.
All this being said, I’m dying to see these guys live. Many times producers and engineers want to ‘clean up’ a song - get rid of the growl and anything that might be seen as not marketable when tracking songs. I prefer my music to be not so pretty and for some reason I think on stage Ms Woods and her companions in rock are a collective, sexy beast to be reckoned with. -Heather Dawson