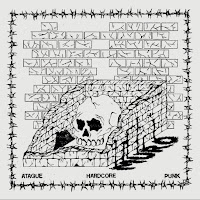 Band: MURO
Place of origin: Bogota, Colombia
Genre: Punk, hardcore
Twelve-inch: Ataque Hardcore Punk
Label: Beach Impediment Records (Richmond, Virginia, USA) (Reissue)
Originally released by Byllepest Distro (Norway), September 9, 2017
Release date: January 22, 2019
It is a cold, rainy day and I have been sent ''Ataque Hardcore Punk'' by MURO. As water pelts against my bedroom window, I sit back and prepare myself for a vicious hardcore assault. The first thing I will mention is that these guys remind me of late-ish era G.G. Allin. (Before The Murder Junkies, but later than The Jabbers). I think G.G. would be proud to hear such music being recorded and produced to this day. I can also mention that in some ways this band reminds me of the Croatian punk-rocker Satan Panonski. Although I do not speak the language, I can sense power and true punk-rock energy pulsing forth from the vocals. The guitars are primal and simplistic, yet they are played with a certain degree of genuine talent. I can say the same for the drums... Primal and Simplistic. For a full length, this offering is very short, with most of the tracks clocking in at under two minutes in length. Still, this is common within the hardcore scene and gives a perfect example of the way the genre is supposed to be. Overall, I can say this release is a nice little blast of music, and I would for sure check out more of this band in the future. As stated on Bandcamp, this was ''Originally released by the outstanding Nordic based Byllepest Distro label in 2017. The "ATAQUE HARDCORE PUNK" 12" was re-pressed for the band's explosive appearance at NOT DEAD YET 2018 and the Canadian tour that followed shortly thereafter.'' This is some of the best hardcore I have heard in recent months and I highly suggest checking it out if you have interest in the genre. Great stuff, MURO! -Devin Joseph Meaney

Lineup:
(no information given)