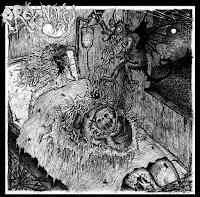 Band: PREGNANCY
Location: Melbourne
Country: Australia
Genre: Goregrind
EP: Demo 2013
Label: Independent
Format: 100 copies limited edition CD-R (sold out), streaming
Release date: January 3rd, 2014 (re-released on vinyl by Nerve Altar and Grindfather Productions August 2017)
Once again my window is splattered with depressing rain, so I have been spending a bit of time scrolling through Youtube for new tunes. During this search, I happened to come upon this EP, the debut release from the Australian goregrind band Pregnancy. From what I read on their Youtube bio, Pregnancy is a gore outfit including members of Internal Rot, Doubled Over, Roskopp, Contaminated and a handful of other bands. I am a fan of Roskopp, so I can for sure anticipate that this is going to be good. I hit the play button, and a wave of vicious grindage shattered my eardrums like a tsunami of splattery awesomeness. Dismal pitched gargling gutturals adorn this release, set alongside with brutal drum blasts and guitars tuned so low that it is hard to decipher what notes are being played. I let the EP play through a total of three times, and I was far from unimpressed. These guys rule! Something that is worth mentioning is that the production quality on this release is great. I listen to a ton of grind and gore, and anyone who is involved with these genres knows that lo-fi is the norm within this scene. Still, it is nice to hear grind with high quality production. Another thing worth mentioning is that the cover art is severely creepy, and is able to stand with the art put out by the greats. Clocking in at around ten and a half minutes, this EP is only short, but it is without question highly enjoyable and put together very well. I highly suggest that fans of this style of music give these guys a listen. Grindcore is love... but goregrind is life! -Devin Joseph Meaney

Track list:
1. Hypodermic Rabies Vessel
2. Lactating Noxious Chunks
3. A Backing-Up of the Bowels
4. Gestated in the Colon
5. Ocean of Piss