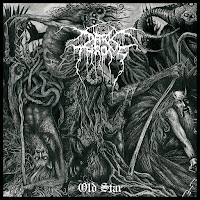 Band: DARKTHRONE
Country: Norway
Genre: Black metal, heavy metal
Full Length: Old Star
Label: Peaceville Records
Release date: May 31, 2019
After three years, Darkthrone return with yet another full length (their eighteenth). The release of “Old Star” couldn’t have come sooner following the theatrical release of Jonas Akerlund’s black metal biopic “Lords Of Chaos”, which has received less than stellar feedback from fans and musicians the movie depicted and likely deserves a spot next to Randall Miller’s “CBGB” and Oliver Stone’s “The Doors” for gross character assassination. Movies like this, instead of fulfilling potential to be good movies, do nothing but reinforce the public’s stereotypes about rock, punk and metal. But this time it’s as if Darkthrone are here to sweep aside the film’s cartoonish sensationalism and the controversy surrounding 90s black metal. It seems like yesterday that I first heard “A Blaze in the Northern Sky” and I remember the resounding impact it had when it was needed. Since “The Cult Is Alive” (which marked their return to Peaceville Records) opinions have been mixed over whether Darkthrone albums are still worthy of their contribution to brutal and extreme music. However, it’s clear that “Old Star” is undeniably about their love of creating music. Not just black metal but doom, death and classic metal, all included in their formula here. It doesn’t seem like they’re making an effort to expand their listenership by first impressions, just playing what they feel and adding whatever fits the songs. “Old Star” was engineered and produced independently, given solid mixing and mastering by Sanford Parker and Jack Control. The black metal flavor of albums past can be heard in “I Muffle Your Inner Choir,” “Alp Man,” “Duke of Gloat” and the title track, particularly in Nocturno Culto’s raspy guitars and Fenriz’s hard-hitting percussion, but I have to admit the doom/stoner vibe following the classic metal theme of “The Hardship of the Scots” threw me. The mood and triplet feel reminds me of “Deliverance” era Corrosion of Conformity (and I mean that in a good way). There is an unspoken vibe in the epic closer “The Key is Inside the Wall” speaking of the raw mid 90s black metal attitude (bands like Fenriz’s side project Isengard on “Høstmørke”). It’s cult and grim without the need for labels. All things considered, this is a band that has aged well since they started out. -Dave Wolff