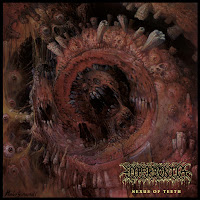 Band: HYPERDONTIA
Location: København
Country: Denmark, Turkey
Genre: Death metal
Full Length: Nexus Of Teeth
Label: Dark Descent Records (USA)
Release date: September 14, 2018
Hyperdontia is a multicultural bunch, made up of members from Denmark and Turkey and hailing from bands such as mighty Phrendelith and Burial Invocation, it is no wonder that the sound created within Nexus Of Teeth is of a hybrid nature. Given this is their debut album, I will go as far as saying this is imposing and commendable.
Expect tracks curdled with dirty gritty guitars, exceptional rhythmic drum tracks, a chaotic brutality of deep dark riffs and of course infamous blast beats. Notoriously, David Mikkelsen's vocal style is ever so monotone and mean and almost inaudible, however, this works! By way of creating a level of savagery that feels extremely secular and evil. This is an album that lacks any impressive breakdowns, however, holds its own on its sheer continuous forceful sound and relentless heaviness. It turns out I didn't miss that element at all and only realized it was void of those breakdowns, on my second listen. The element of blackness within this album surely did win me over, of course, those oh so blackened elements combined with delicious guitar technical solos was an excellent contrast and pure to the death metal genre.
Every song on Nexus Of Teeth provides a deep sense of aggression and violence and while the lyrics aren't clear, it forces you to use your own senses, musical appreciation and imagination to create your own story within this album, and it won't be one of roses and lollipops, let me give you the tip. Do yourself a favour and do read the lyrics, because they are rather poetic and disturbing. Some tracks should come with "listen with the light on" warning.
Nexus Of Teeth is full of vocals, that I'm sure has been damned in hell and possibly one of the best album I have heard so far in 2019. Tracks such as “Of Spine and Thorn” will provide a very secular and drive fast vibe for the listener. David has pain to his screams, which are incredibly addictive when he hits his (albeit subtle in height) shrieks and knotted my tummy in the best death metal way.
Stained with darkness only you can appreciate if you listen, Nexus Of Teeth is a vile and opaque listen. The interesting drum tracks and patterns create such a heaviness to their sound, with those stocky thick riffs and droning bass. This almost feels doom-like at times, and I enjoyed that element. This album has a lot of appeal in the blackened compositions, together with the roots of death metal, being its intense and heavy pace with technical guitar patterns, overall creating an impressive metal structure of notable heavy levels.
There is no release from this albums tyrant grip as it smashes you from one heaviest matter track to the next. It is an onslaught to the ears. I had my picks off this album, such as Teeth and Nails for its sheer brutality and violence and Majesty for its mysterious and adverse style, brutish atmosphere and technical musicianship. Escaping the Mortal Embodiment is lyrically smart and carries an unrelenting darkness, which is full of animosity. I properly enjoyed each of the eight tracks from this album. This is sweaty shirtless people moshing hard across the pit stuff.
My only hope to wrap this review up is that this band creates more metal for us to indulge in. Enjoy. -Kelly Tee