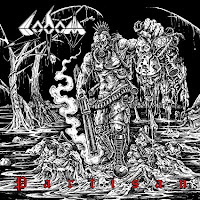 Band: SODOM
Country of origin: Germany
Genre: Thrash metal
EP: Partisan
Label: Steamhammer Records
Release date: November 23, 2018
Another of my favorite old school thrash bands are still passionate and aggressive after all these years, and three decades of recording brutal material and surviving lineup changes have seasoned them as a unit. Founding member Tom Angel Ripper stated in the documentary filmed for 2005’s Lords Of Depravity that Sodom’s primal approach to metal reflected the industrial working class neighborhood they emerged from. This was a direct antithesis to the polished music from Germany's more privileged communities, and contributed something frighteningly real to the musical movements growing in England and the US. You can get a feel of the dirt, machinery and hazardous working conditions of the mines on the band’s new EP released last November. Years of experience have built a colossal war machine of the machinery reflected by the two new songs recorded for it. “Partisan” and “Conflagration” also show how descriptive and graphic Angel Ripper’s lyrics describing wartime horror and religious persecution have become since Persecution Mania and Agent Orange. Delivered with his time-tested vocal style sounding like a lithe-muscled demon crawling from the ground to seek the blood of mortals, the imagery makes the point clear as if you’re experiencing those horrors firsthand. There’s a clear view of the slaughter and the darkened skies overhead that firmly holds your attention. Similarly, the live recordings of “Tired And Red” and “One Step Over The Line” from the 2018 Rock Hard Festival in Germany (where they shared the stage with Saxon, Overkill, Marduk and others) make you feel as if you’re part of the massive crowd that was in attendance. -Dave Wolff