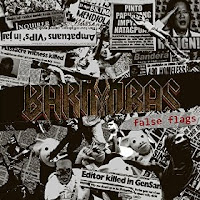 BARABBAS
False Flag
Independent
http://www.facebook.com/Barabbas-186064474777445
Barabbas from the Philippines have been around since 2001. The band’s lineup has been involved in the local scenes in Manila and Bicol since 1994 having played in Treachery, Bagang, Muerte and Camposanto. Their style of “full contact protest metal” crosses over stoner rock and 2000s melodic thrash. Their production job on their EP False Flag is particularly guitar heavy, boasting a great deal of crunch and reaching the sort of primal depths Sepultura achieved in their Chaos A.D./Roots era. It’s an absorbing synthesis of techniques that works surprisingly well and validates the modern approach to thrash unlike how the mainstream toned it down. For an EP with only three songs False Flag crushes, and its disposition corresponds with the clear effort the band makes to write socially conscious lyrics in with their angst-ridden verses. Granted it’s not new for bands to write about social strife and its relation to politics, but it is a welcome concept for a band from that area and I’m sure other Philippine bands are doing something similar with their views on society. The musicianship as it’s showcased on this EP sounds typical at first; the Black Sabbath influences in these three songs is immediately apparent; but then the tempos begin to break mid-verse and alter things drastically, almost as if new methods of variety are creating themselves. The transitions of In Celebration Of Ignorance are agreeable examples of this, and the band even launches into a jazz section in the middle of Neural Bend of the Thinking Man which is something I really hadn’t expected to hear from them. The final track Matapos Ang Dilim hearkens to the early 90s when Pantera made their transition from playing glam to playing heavier music. This song takes yet another unexpected turn into pure doom, complete with heaviness and atmosphere. To display that much diversity over the course of three songs is no small feat for a band; for this Barabbas deserve props. -Dave Wolff