Single Review: PAGANFIRE The Executor Is Back 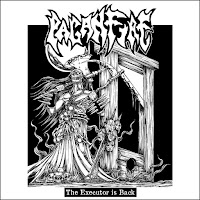 PAGANFIRE
The Executor Is Back
Independent
The Executor Is Back is a new two-track single from Paganfire, the latest in a long line of demos, promo cassettes, full lengths, live albums, EPs, promotional videos and split releases going back to 2004. I’ve commented before how the band never strayed from their approach to extreme music since their formation, nor has their determination to bring their furious brand of death-thrash to the rest of the world wavered, whether releasing material independently or through obscure labels and distro companies. In 2016 we’re getting another example of the underground spirit channeled through their blazing guitars, frenetic percussion and abrasive vocals. I would say the six-minute piece recorded for this single takes me farther back to the mid-nineties. While there’s just one original song to go by, hearing “The Executor Is Back” reminded me of discovering death metal on obscure compilations like Satan's Revenge Part II, and of the time I visited mom and pop record stores to see what new releases just arrived. This song reaches almost six minutes in length and contains more guitar progressions than you might expect from bands like this, heading closer to epic territory while bombarding you with time changes and little room to catch breath between them. So relentless is this track that by the time it ends you are convinced beyond any shred of doubt that the executor has returned to stay. The second track is a cover of Gehennah’s “Hellstorm” from their 1996 album King Of The Sidewalk (yet another 90s favorite of mine). It’s about twenty years old, but Paganfire breathe new life into it as if it had just been written and composed recently. -Dave Wolff