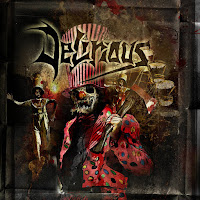 DELIRIOUS
Moshcircus
Independent
http://www.facebook.com/deliriousthrash
Today my focus is the thrash metal band Delirious from Hamm, Germany. I gotta say this band definitely has some serious highlights to their sound. The first few songs I listened to really got the blood pumpin' and was very impressive. The album MoshCircus is the one we discuss today. The first handful of songs from the album were straight up, no holds barred, authentic ass kickery, worthy of the thrash metal badge with titles such as Drowning In Your Blood, I Can't Resist, Toxic Trace, Bloodsucker, and The Neverending Rain. I could smell alot of old school and new school influences in the mix. I heard some flavors of the likes of King Diamond, Cradle of Filth, Overkill, Iron Maiden, even W.A.S.P. and Gwar. When these guys are on it, it's like a runaway train that can't be stopped. If the entire album kept the same drive and seasoned sound as these particular songs, I could see these guys going far. There were, admittedly, a few tunes that lacked a little in the vocals where the music still stayed on point, others like the one titled Your Decision, Dead Man Rising, and H.M.M.I.G. were questionable. Your Decision was great through the verses, but when you get to the chorus it's a bit of a trainwreck. It seems to take a completely different direction from the rest of the song and does it no justice. H.M.M.I.G. was phenomenal as far as the instrumental parts go, but vocals were very droll and lacked the conviction I heard in some of the other songs. Dead Man Rising, however, should not have been released in the shape it was left to be in. Extreme timing issues on all ends with that one. So there you have it, the highs and lows of the thrash metal band Delirious from Hamm, Germany. Keep up the good work and tighten up those loose ends and wiggle elbows and we'll be keeping an eye out for ya. -Angel Michaels-Abaddon