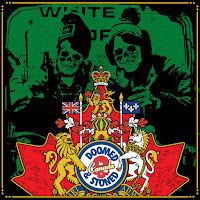 VARIOUS ARTISTS
Doomed & Stoned in Canada
Doomed And Stoned
http://www.facebook.com/DoomedStoned
This is the latest compilation of the Doomed And Stoned series, released in September of last year. Doomed & Stoned in Canada is the follow up release to Doomed & Stoned in Portland, Doomed in Oregon, Doomed & Stoned in Mexico: Una Retrospectiva and The Enchanter’s Ball. As usual songs are featured from a seemingly infinite number of bands from a scene that otherwise gets little to no mainstream exposure, presumably because there is no money in signing them to major labels. Going by the painstaking process by which these compilations are arranged, it’s obvious label head Billy Goate cares about helping unsigned doom metal bands reach more listeners outside their respective communities and supporting the genre as a whole. Consider the time he invested in searching for all the bands appearing on these five compilations, and in contacting each of them for permission to use their material, and you’ll get the idea. If anyone doubted there were thriving doom metal and stoner rock scenes in the U.S. and other countries and thought the majority of consumers out there want to hear nu metal or pop punk, this compilation series will prove you wrong. It definitely hit me with the impact of a ton of bricks and made the point clear that doom and stoner have viable target audiences despite the limited publicity the genres have had even from the indie labels with such bands on their rosters. Before I started corresponding with Billy I was only aware of a few active doom bands and thought it was mostly an 80s phenomenon. I had no idea the scenes in those cities and countries were so huge, and I would guess there are scenes in many more areas that are just as active. The question arises if the bands gathered to appear on this installment justify the time and effort channeled into it. If you like Trouble, The Obsessed, Earth and especially Black Sabbath, you may well like most of the 75 bands you get to hear. It will take you a long time to listen to it in its entirety but in the end it’s worth the journey. They are all capable bands and have their act together when it comes to composing crushing music. From what I heard each band relatively has their own sound so it won’t become too repetitive. All the compilations in this series are worth checking out for all the hard work involved in compiling them. -Dave Wolff