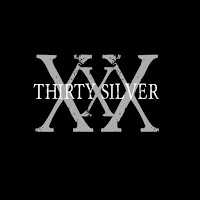 THIRTY SILVER
Sampler
Independent
http://thirtysilver.bandcamp.com
http://www.facebook.com/thirtysilverband
What an emotional vocalist we have here!! Powerful in many ways and in all directions. The first resemblance that came to mind is the band Tool. Both have the same way of singing. Musically it’s a "bit" strange. I can't say they sound like grunge because when we talk about the grunge musical movement we immediately think about Nirvana and Kurt Cobain. I have listened to all the tracks on their site, and the resemblance to the vocalist of Tool is impressive. He sings with emotion; it's not that superficial if you pay attention. They’re a powerful rock band to my ears. About the song "Dark And Sinister Man, Have At Thee!", I can't resist comparing it to a great actor who scared me many times with his silver balls set in the Phantasm series, Angus Scrimm (I would like to write this despite that he passed away: Angus made Scrimm in his movies). I'm pretty sure the song is related to him in a certain way. I have a favorite title called "Familiar". I could listen to it all day long. -Abyss Forgottentomb