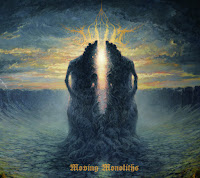 WILT
Moving Monoliths
Bindrune Recordings
http://wiltmanitoba.bandcamp.com
The beginning of the first track "Illusion Of Hope" reminds me of My Dying Bride so I was expecting an instrumental, but listening to the whole song, it sounds really metal (power metal maybe? I don't want to label any metal bands). Played slowly this way it is really doomy. Something dead and doomed on the surface, like those moving monoliths (the title of the album). Stones are supposed to be "lifeless" but inside there are microorganisms evolving before your eyes but you can't see them. You can't even hear that hidden life breath. This is just sort of a metaphor. Moving monoliths are symbolic, changing slowly. But more seriously, the cover artwork reminds me of the two giants of stone from the movie "The Lord of the Rings" and also in "Jason and the Argonauts". All is symbolic: The Elder is "the older"; the earth is one of the oldest stone in the universe. So it means it holds the quintessence of life and its secrets. Stones hold life inside of themselves, but... sometimes, life sleeps too long, so you can't see anything grow, like a sterile soil (Illusion Of Hope). A sterile landscape of stone is about Solitude. No one around, no expected life. But there's a micro life somehow. Imagining that monoliths could move by themselves is the way to explain that doom is not only about death and things rotting slowly, but it's all about the cycle of Life. Once again, it reminds me of the autumn and winter (the real ones) I know so well, and technically they are jamming quite like My Dying Bride. The four tracks are a pure lonely moment with oneself, remembering what Life is. Remember that stones are holding the origin of our planet; they have a micro biological memory. The cover artwork is certainly about the nature back on tracks to make you remember to save our environment. In a way. One thing is sure: this album has blown my head off. It's gonna be difficult to pick up the pieces to recombine it, haha. -Abyss Forgottentomb