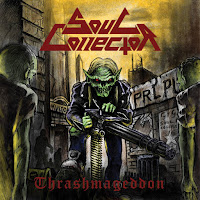 SOUL COLLECTOR
Thrashmageddon
Defense Records
http://www.facebook.com/SoulCollectorThrash
We all know the zombie apocalypse is nothing new when it comes to thrash metal subject matter. Some of the best bands have been incorporating these themes since there has been such a thing as thrash. Including bands who have their material reviewed in this blog for your perusal. Many death metal bands as well as thrash bands have sampled Night Of The Living Dead in one or more of their songs. Sampling from this movie has almost become a rite of passage for many. Can Soul Collector rejuvenate this lyrical approach and make it sound new? It depends on the listener to decide, but for me they compose an impressive soundtrack for the scenario. As usual you hear a scene sample from NOTLD introducing Thrashmageddon; specifically the newscast stating that people seemingly in a trance are killing and eating their victims. On the heels of this is the energetic opening riff of Army Of The Dead which kicks things off on a potent vibe. Soul Collector are apparently huge Exodus fans; if you didn’t know they are based in Poland you’d swear they’re from the Bay Area of California. The progressions, the harmonies and most of all the vocals give these impressions in several songs, such as the title track and Bless My Gun. The lead vocals consistently remind me of Steve Souza, though I’ve heard them compared to Blitz of Overkill. Even so, it may be a cop out to write this band off as imitators, since I’ve heard bands copying their influences more obviously, with no hint of their own personalities. There are sufficient differences showing Soul Collector have their own identity as opposed to being a complete ripoff of the classic era. For one thing, there are noticeable differences in the song structure. The riffs and time changes are consolidated differently, the solos use different scales and harmonies, and the song length has a general range of four to eight minutes. Songs like Horrorhouse show them starting to explore their own territory. The band’s Bandcamp profile has ordering information and links to other bands on the Defense Records roster. -Dave Wolff