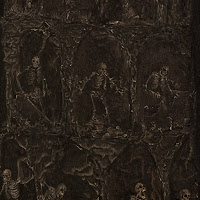 BONE TOMB
Tombs Of Blood
Goat Prayer Records
http://www.facebook.com/bonetomb
http://goatprayerrecords.bandcamp.com
Bone Tomb is the brainchild of Dan Rochester who I was introduced to by our mutual friend Matthew Langley. Langley now does the depressive suicidal black metal project Plaintive Bearer. Bone Tomb is based in the United Kingdom and is streaming their debut demo on Goatprayer Records’ Bandcamp page, currently showcasing several full length albums including Dolven’s Navigating The Labyrith and Vacivis’ Rite Of Ascension. I have yet to hear those but Tombs Of Blood was a favorable listening experience. Initially I was reminded of Full Moon Productions bands such as Algaion. The mood and atmosphere of the first track (which is the title track) is similar to Algaion on their 1995 album Oimai Alagiou; what most reminded me of it was the abrupt manner the song begins with. It thrusts you into a chaotic black metal whirlwind with blast beats and dynamic guitars. Just as suddenly it changes to a triplet march and rages through another time change or two even before the first verse. At first I picked up on that mid nineties flavor, that purist attitude that existed as bands had free reign with their material before extreme metal began its MTV and FUSE rotation a decade later inspiring a new generation of mall goths who would have Oystein Aarseth spinning in his grave. As I listened on I realized there was even more to the potential Bone Tomb displays here. That first track is in the five minute range but it feels much more epic with all the time changes written into it. The following track Macabre is Eternal carries things even further, as it incorporates a disturbing keyboard passage into its painfully slow rhythm. The energy builds with this until the song finally explodes into a series of thrash and blast beats which are accompanied by more unorthodox guitar progressions and tempo changes. Toward the end of this song is yet another slow section with vocal choruses that reminded me of old Borknagar, Bone Tomb shines just as brightly in their inventive treatment of Celtic Frost’s Sorrows Of The Moon, Martin Ain’s Poe-esque lyrical piece from Into The Pandemonium. Strange license is taken with this cover track; this is something you’ll have to experience firsthand to appreciate it completely. -Dave Wolff