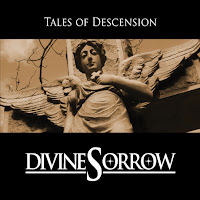 DIVINE SORROW
Tales Of Descension
Independent
http://www.divinesorrow.com
http://www.facebook.com/divinesorrowband
There aren't many bands that I can stay with that shows consistency in their sound, their lyrics and their collective musical focus. DIVINE SORROW is one of those bands. DS is an Indie band out of St Louis; a city rich with unrecognized talent.
The city of St Louis has given us many amazingly talented artists, writers and musicians, but, Divine Sorrow is quickly overtaking the pack with both their debut CD - Tales of Descension gave us an unbelievable introduction to the individual talents of Lee Skyles on drums, Mike Sikorski and Michael Di Pew on guitars ties up nicely with the bass, vocals and incredible lyrics written by leader Bryan Chappell.
Their second CD has surpassed the first. With simple logic, they are a bit more experienced with the recording process and Bryan Chappell is writing with a swift pen and extracting his inspirations from every possible angle.
The title of their second CD is SEVEN DEADLY... and the music is addictive. A change has been made Di Pew has been replaced by the impeccable guitarist, Paul Shaffrin.
I spoke to Bryan earlier this week, only to discover that they are now in the studio recording their third CD!
Divine Sorrow has their own sound. However, if I were to offer up one band that they may have some similarities with, it would be TOOL.
I suppose now would be just as good a time as any to mention that Divine Sorrow was the recipient of THE PEOPLE'S CHOICE AWARD held every year by the Riverfront Times, an avant-garde and savvy arts magazine here in the Lou.
One of my personal favorites, each member untouched by the fame and notoriety that comes with being THE band to beat, four men who are are just happy to play for your entertainment and are just as happy to get out in the world and play like the big boys they still are inside.
It is my pleasure to review this band, I've come to truly appreciate each of them individually and respect them jointly. It is my honor to introduce them to you. -Teresa Clayton