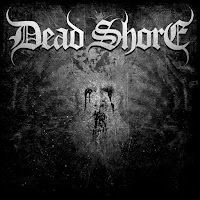 DEAD SHORE
EP
Independent
Where to start with this insane album hand delivered from satan himself straight from the deepest, darkest, bloodiest pit of hell! Nothing has ever infused my imagination so strongly with visions of mutilation and human despair… While making the hair on my arms rise as if to try to separate their follicles from my skin. The guitars were absolutely impeccable. The vocals perfectly fit the black metal style. Also, I could definitely see the influence from Immortal and Vader. While all tracks were brutal beyond belief, my favorite track had to be “Godless Martyr.” FLAWLESS. What I enjoyed most about this track was its ability to suck me into the darkest places of my soul… Make me feel the things that I have hidden beneath my “happy” persona. I believe that is what more metal artists should aim for… Not to just write lyrics about blood, gore, and human despair, but to make the listener FEEL the despair in their music… Feel THEIR despair. Open the wounds that made them who they are today! That my friends, is metal. Dead Shore is metal. -Alecia Fincher