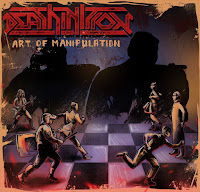 DEATHINITION
Art Of Manipulation
Independent
http://www.facebook.com/deathinition
This thrash metal band began in Bydgoszcz, Poland in 2008. Initially a three piece, they added two members and released their debut demo in December of 2011. More lineup changes occurred before the debut EP The Art Of Manipulation came out in 2013. Presently the lineup of the band is Adi (lead vocals), Igor (guitar/vocals), Maciej (guitar/backing vocals), Miłosz (bass/backing vocals) and Witek (drums). This is the first incarnation of the band I’m hearing; even if it’s an EP with four tracks they recorded, in terms of pure conviction they sound like a seasoned bunch who have worked and played together for much longer. Admittedly the production could use some improvement on future releases; one example is a bass solo in the middle of Art Of Misunderstanding which sounds mixed too loud. The production could use a little work as some of the transitions within the songs, while being inventive, come across as too abrupt and the endings cut off too soon or fade out where they don’t need to. Aside from these complaints we’re dealing with a band of talented musicians; the guitar progressions prove with a vengeance just now much ability and endurance is required to play thrash metal. The vocals remind me of melodic bands of the 80s and 90s, particularly Agent Steel. For a young band to blow me away with their dexterity and tightness speaks volumes about what they’ll accomplish with enough time and practice. This is vicious, malevolent, impenitent thrash that catches hold of your windpipe, just as the best of the bunch had dome in the classic era. A release that would likely have been heard on my stereo if it had come out back in the day. -Dave Wolff