CD Review: SOMEDAY I COULD KILL Where The Wolves Rest 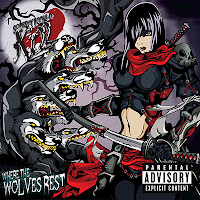 SOMEDAY I COULD KILL
Where The Wolves Rest
Turkey Vulture
http://www.facebook.com/turkeyvulturerecords
Someday I Could Kill (SICK for short) formed in Waupaca, Wisconsin in 2009 and are currently signed to Turkey Vulture Records, a label you might be familiar with from my reviews on this blog and Obscure Chaos zine’s blog. Where The Wolves Rest is the band’s only release so far, having been available since 2013. The band display a range in influence from classic metal and thrash to Black Sabbath to (occasionally) grunge. Their Facebook bio says they initially intended to play grunge when starting out, so some elements of this must have lasted while they fleshed themselves out. Pantera is one band they cite as a major influence; I could perceive those similarities from the outset. Perhaps there was some Alice In Chains and punk influence too, but the energy of 80s thrash dominated most of the material. We Are Legion is a solid start but things really take off with Crawling Around. I didn’t hear direct punk influence until Rock The 40. From there on this album began to learn closer to grunge. During Rock The 40 I was somewhat reminded of a song with a similar title by a local NYC punk band called Leftover Crack, as well as a few other NY punk bands. I should also mention the acoustic guitar interludes that appear on the album and the opening guitars of Psilocybin, accompanied by vocals similar to the late, great Layne Staley. This song’s psychedelic and Eqyptian feel adds yet another dimension to When The Wolves Rest. Then there’s the nourish theme introducing Midget Tea Part, the Butthole Surfers influence in White Persia and the somber delivery of Lashing Back. All these elements sound as fresh as they would have sounded if they had been recorded twenty-five years ago (hard to believe it’s been that long). In many ways I am certainly reminded of a different era in popular music, an era before boy bands and pop divas oversaturated the industry. There is still value to be found in the past. -Dave Wolff