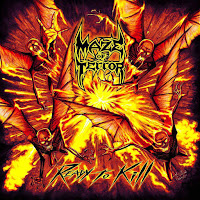 MAZE OF TERROR
Ready To Kill
Empire Records
http://www.facebook.com/mazeofterrorthrash
I’ve known of Maze Of Terror since I reviewed their Skullcrusher album for Obscure Chaos zine in 2014. A couple years later the band is still going strong in their home country Peru. Ready To Kill is out this month and its title is appropriate concerning their quest to storm underground communities everywhere. I’ve heard many samples on death metal, grindcore and goregrind albums, but not exactly like the sample introducing this one. It portrays the arrival of the age of nuclear power as an apocalyptic demon, reaching theatrical heights alongside the material. The line by Robert Oppenheimer quoting the Baghavad Gita “Now I am become death, the destroyer of worlds” have a prophetic feel as it’s immediately followed by the opening guitar progression of Rotting Force. This cut establishes the new album as having an even balance; you can clearly hear bass guitar in relation to the other instruments. The production tightens the songs to whipcord with enough of a dark quality to add natural malevolence to them. This enables each song to bludgeon your brain matter into gruel. The closest comparison I can think of is the production job on Destruction’s 1985 full length Infernal Overkill, its primitive delivery polished and stretched out to the point of unbearable intensity. There are some notable elements of Slayer in the musicianship, but not to the point of overemulating them. The vocals remind me of Mille Petrozza (Kreator) only deeper and more rasping; this fits the subject matter of There Will Be Blood, Violent Mind Of Hate, Bringer Of Torture and other songs gathered for the new album. This is a brutal, relentless, vital thrash recording I’d advise you to check out upon its release. -Dave Wolff