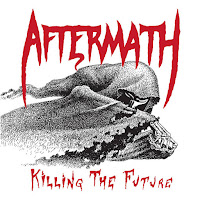 AFTERMATH
Killing The Future
Tribunal/Divebomb
Touting themselves as “one of the original crossover bands of the 1980s,” Aftermath from Chicago, Illinois were active from 1985 to 1996, disbanded and reformed in 2015, I wonder why I hadn’t heard of them in the eighties, but I recently discovered several bands from that era while surfing on Youtube and there are likely many more I was unfamiliar with back then. After reforming they fortunately decided to re-release their debut demos (Demo #1 from 1985 and Killing The Future from 1987) for a new generation of thrashers to release their pent-up frustrations to, under safer conditions than letting it out in the street. During the time they were active Aftermath has refined their old school aggression a few times, forging new avenues for it classified as “proto crossover thrashcore speedcore,” “dark technical progressive experimental thrash metal” and finally “dark progressive experimental thrash.” No matter the incarnation, they remained faithful to their shared vision from their first practice. It remains to be seen how their dedication will pay off thirty years after they got together. At any rate, the re-release of their first two demos on Killing The Future is a blast from the past you’ll want to hear if you appreciate pure in-your-face thrash metal fire. This is not the kind of band you heard of on MTV, they were the band you read about in Metal Forces and other fanzines like Metal Core and Nightmare, corresponding with them through snail mail. Their similarities to D.R.I. and Wehrmacht on the second demo are obvious from the start, as they were recorded when Stateside thrash and hardcore bands began pushing their limits of volume and velocity, and the level of dexterity to which they could take their songwriting. When Will You Die and Meltdown from Killing The Future '87 have breakneck speed, spot on musicianship, precise time changes and relentless vocals. As I listen I also wonder how U.S. thrash metal would have turned out if more bands like this were active and fewer tried to go mainstream. These songs will convince you how far they went to show the talent and ability required to play thrash. The only band active when Aftermath started was S.O.D. but other thrash and thrash-core bands I am reminded of include Cryptic Slaughter, Lethal Aggression, Ludichrist and Carnivore, all bands that took that much needed next step. The songs on Aftermath's 1985 demo (including Sentenced To Death and Revenge) are a little more similar to early thrash/hardcore, slightly less blast than the second demo but the guitars, drums and hardcore elements do much to push them along. I would also recommend checking out Eyes Of Tomorrow, a full length released in 1994. It was recorded in 1988 but it's release was delayed due to financial reasons. Two songs from this album are uploaded at Shadowkingdom Records' official Bandcamp. -Dave Wolff