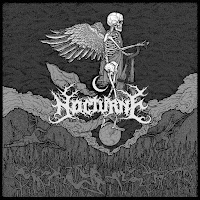 NOCTURNE
Nocturne
Unlight Productions
Well then, this is a tidy piece of work indeed.... Austrian Melodic black metal, forged in 2006 with a doomy edge to it. By half way into the first song its rather obvious that these guys are really good at what they do, they are not newbies or beginners, they exhibit great control over their instruments with some rather epic arrangements, the guitars have a melodic but crushing tone to them, using both melodic and some hyperspeed alternate picking droning sound over some punishing double kick work from the drummer… and a dark sinister lyrical feel, with a vocalist that reminds me of the guy from Dark Funeral a little bit. If one could imagine this would probably appeal to fans of the aforementioned Dark Funeral crossed with Viking era Bathory and maybe some orchestral feelings of Cradle of Filth. Overall it’s a well varied recording and remains heavy but never gets boring or loses its focus, which considering the amount of styles it crosses over is no mean feat!
Production wise this ticks all the boxes too... crisp and clear and everything comes through really well,,, I honestly can't fault this at all for a band I've never heard of before this is instantly likeable, for a recording of this length (almost an hour / 9 tracks) it never gets boring either, It's well varied material mostly within a traditional black metal framework, almost hypnotic in parts, especially the keyboard track "Nocturne" and strangely enough one song "Ama Lilith" which seems to start off in an almost old English punk feel... I would have no problems recommending this to any black metal friends I have. The lads have signed on to French label UNLIGHT RECORDS, distributed by Drakkar records to so you know they are no amateurs if these guys show faith in their abilities.
Anyway do yourself a favour and check out the Bandcamp site and if you like, show some support and make a purchase! -Reggae