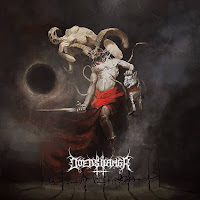 DOEDSVANGR
Satan Ov Suns
Immortal Frost Productions
Doedsvangr consists of members of Tsjuder, Horna, Behexen and Nordjevel which explains their debut full length’s cult overtones and raw production. Satan Ov Suns was released last March in a limited edition of 1000 CDs (with a four page booklet) and 500 vinyl albums (150 of these with an A2 size poster). It’s also posted for streaming at the official Bandcamp site of Immortal Frost Productions. Another thing accounting for the album’s overtones and production is that it was recorded in Norway (Velvet Recording in Spydeberg, Klang Studios in Oslo). The power trio comprising the band have had extensive experience playing in bands, especially the guitarist-bassist Shatraug who is working with an endless succession of outfits including Black Stench, Horna, Mortualia, Necroslut and Vritra. You may ask what Norwegian and Finnish musicians can do after those countries have generated black metal acts since 1990, most likely more than you can list in one sitting. Or you may be thinking what they can achieve while staying in their comfort zone. The question of whether or not a band is open minded doesn’t have to involve suddenly deciding “now we’re going to change our sound so listeners can see how versatile we are.” As you gather I am all for bands who seek to do something new, but staying in one’s own comfort zone can work for a band just as well. While Doedsvangr’s formula is relatively basic in the field of extreme music, they seem to have little concern with branching out. Pooling their experience to record their debut they wrote what they were comfortable with writing, they look within rather than without. They wear their collective influences well and the resulting hellspawn speaks for itself. Doedsvangr are noteworthy in that they don’t pretend to be more than they are. They write what they write, take it or leave it. It worked for Darkthrone on Under A Funeral Moon and it works for them. Frontman Doedsadmiral has a track record of only three bands (Enepsigos, Nordjevel and Svartelder) but he shows his capability to deliver a guttural rasp to match the tempestuousness composed by Shatraug and Antichristian (Beaten to Death, Grimfist, Tsjuder, Umoral et al). Many of the songs on Satan Ov Suns have lengthy sections of diabolical riffs looped and repeated to the point of being mesmeric and trance inducing. I also noticed how much the songs have a way of staying with you after the album concludes. This alone shows the band is doing something right, and fulfilling the role of black metal as the antithesis of what’s acceptable about popular music. -Dave Wolff
Track list:
1. Our Lord Cometh!
2. Rituals
3. Doedsvangr
4. Black Dawn
5. Northern Watchtowers
6. Diaboli
7. Gnashing of Teeth
8. Breath of Lucifer
9. Throne of Black Illumination
10. Blood Whores
11. Black Sun Nimbus