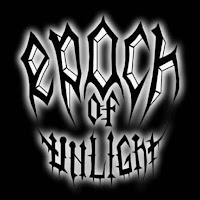 EPOCH OF UNLIGHT
Foreshadows
Independent
Memphis, Tennessee’s Epoch Of Unlight is one of the first U.S. black metal bands and one of the bands who were interviewed for the January, 1997 debut issue of Autoeroticasphyxium. This issue is long out of print along with the next five issues, but other interviews included Curse, Insatanity, Blood Storm, Murder Junkies, Abazagorath, Exhume Distribution and Endemoniada Zine. Drummer and founding member Tino LoSicco (also of local bands Ash of Cedars and Incineration) was on board since day one and represented the band in their interview. Their earliest lineup as a death metal/grindcore band was named Enraptured. A self-titled demo was recorded and released in 1993 before they switched to Requiem a year later. Though nothing was released by the band at that time, they added black metal to their death metal/grindcore roots and became Epoch Of Unlight. E.O.N. released three demos, two EPs and three full lengths besides appearing on a split EP with Goatwhore (during which time they were signed to NY’s The End records), then stuck with gigs in the southern region of the U.S. and working on demo material for the next decade. 2015 saw their new EP Foreshadows which can be streamed at Bandcamp with three older releases (the 1996 EP Within the Night, the 1997 demo Black & Crimson Glory and a demo of the 2001 album Caught In The Unlight). E.O.N. has also kept the same lineup since ‘94 (Lo Sicco, guitarist/vocalist Jason Smith, guitarist John Fortier and bassist Joe Totty); their only lineup change was adding a new lead vocalist in 2016. This is an intense release balancing black metal, thrash, melodic death metal and a bit of traditional metal, with inventive arrangements. Having played together for many years the band is comfortable working together and familiar with each other’s musicianship. And yes the lyrics are at their Bandcamp page. The verses and choruses are kindred in tone to those written by Darkthrone, Immortal and Ancient from 1993-98, being highly descriptive in their darkened tales, while the music provides strong visuals. Wrath Of The Cryomancer instantly drew me into its narrative making me eager to see how it would turn out. This quality of the music and lyrics grows with The Möbius Path (Numerus Bicallis!), Night Hunt and ...Of Feral Eyes. All Light Dies (In The Hyper-Naught) ends the EP on a perfect note. Certainly a triumphant return for the band, and check them out on Youtube as well as Bandcamp. -Dave Wolff