EP Review: OPERA AT THE MASSACRE From The Deepest 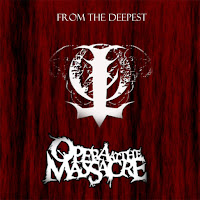 OPERA AT THE MASSACRE
From The Deepest
Independent
Opera At The Massacre is a melodic death metal-core act founded in Mexico in 2011. Don’t let their postmodern melody fool you, this band is as crushing as any purist death metal band and don’t rely on subtlety to make their point. From The Deepest is their debut EP released in 2016; for an intro and three songs it’s weighty and compelling enough to reflect the adherence to bombast and heaviness generally shared by Mexican underground bands. OATM boasts a female vocalist who readily holds her own alongside her male counterparts from her home country or elsewhere. It would be hard-pressed not to be attentive to her throaty, gravelly growl while attending these tracks; you might even suspect her abilities go beyond many male DM vocalists (excepting accomplished elders such as George Corpsegrinder, Glen Benton or Will Rahmer). If this is still an issue with some genre fans Rubi Rodriguez eradicates any doubt, delivering the most durable vocals I’ve heard from a woman since I listened to Lori Bravo and Nuclear Death on their Wake Me When I’m Dead demo. Taking in what the band brings to From The Deepest indicates why such vocals are needed for it. Firstly the piano intro On The Way for its haunting overtones sounds like it could have been composed for a goth metal or black metal album. Slaves In Agony with its lead harmonies, crunch, groove and aggression, exhibits range of influences conveyed with equal fervor. On this song Rodriguez demonstrates a singing voice as well as an ability to procure a guttural roar. From The Deepest comes together with Reviving The Corpse and The Punishment Of False Suffering, on which their groove/thrash sensibilities are developing agreeably. One drawback is that the Bandcamp uploads of these songs aren’t accompanied by the lyrics, which can be a disappointment to some who need to read along to get the whole package. I will make one concession that this can get in the way when listening to a band. I believe on the other hand that experienced vocalists in extreme music can perfect their diction to match their brutal style. With practice Rodriguez has the potential to develop her approach if people listen closely enough.   -Dave Wolff

Track list:
1. On The Way (Intro)
2. Slaves In Agony
3. Reviving The Corpse
4. The Punishment Of False Suffering