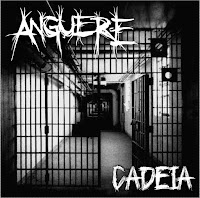 ANGUERE
Cadeia
Imundo Records
Anguere official site
Anguere on Facebook
Anguere on Bandcamp
Anguere on Twitter
Anguere on Soundcloud
Anguere may sound familiar if you read Simon Brown’s November review of their Estado de Cboque video. The song was from their full length Choque the Brazilians released independently in December 2015. Choque is available for Bandcamp streaming with their latest EP Cadeia released May 16. Think of Sepultura blown back as a hardcore band with angrier vocals and you have a basic idea of their sound. In the two years since their last full length the band has become heavier and condensed their energy into slightly shorter compositions. The band states this is the current culmination of their growth as a unit, tightening the thrash, groove and native rhythms into intense explosions of controlled energy. I know little of the hardcore scenes in Brazil or the political climate surrounding them, but there’s something about the three tracks of this EP suggesting that being involved in them is no walk in the park. The complete running time is eight minutes but it’s executed with a tempestuousness so ferocious it makes many of the newer U.S. bands sound subdued. As difficult as it is to out-heavy an underground giant like Sepultura, Anguere is taking South American metal and hardcore to the next level. The heaviness of Cadeia vibrates with the destructive potential of the most devastating nuclear warhead ever built, and threatens to reduce you to a puddle of entrails within seconds. Eight minutes is all listeners can endure before their brains are crushed to gruel. This is not to say the band deliver this brutality with refinement, as the songs are carefully arranged to calculated to hook you and build in intensity. As the lyrics are sung in Spanish, as far as their subject matter you’d have to ask the band about the inspiration for them. Independent movies made in Brazil like City Of God are brutal representations of being a kid there. Judging from them, corporate gentrification and media spin likely pales in comparison to what kids have to endure. Cadela is the aural equivalent of the poverty and violence shown in those movies, and is the closest you’ll come to being there aside from traveling to Brazil to sample it firsthand. The most groundbreaking underground music has always come from less affluent communities (NYC’s lower east side, the working class neighborhoods of England and Germany), and the Brazilian scene has gained longevity over the years. Anguere and other bands we haven’t heard of yet seem poised to be the next wave of S.A. bands to make an impression on extreme music.  -Dave Wolff