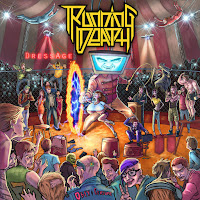 RUNNING DEATH
DressAge
Punishment 18
The earliest moments of DressAge make it apparent that Running Death retained their years growing up with Iron Maiden, particularly from Killers to Powerslave, and even more so growing up with Megadeth from 1986 to 1990. Those bands delivered performances of high energy, energy the German thrashers emulate more than adequately. One might think this is something like how Megadeth would have sounded if they hadn’t made the occasional mainstream friendly effort later in their career. It may be slick, melodic and polished but DressAge is thrash with sufficiently strong ties to its roots, unconcerned whether people find it too excessive, too grating on their nerves. Aside from the fact that no band emerging from Germany can emulate the working class atmosphere Destruction, Sodom and Kreator captured on their demos and early vinyl releases but at least some of it exists in the pounding drums and frenetic guitars here. These elements are as extravagant as you can expect from a band determined to prove that substance overcomes style and passion overcomes hype. One complaint I have from listening is Simon Bihlmayer’s vocals sound too close to Dave Mustaine, and this tends to take me out of it, but the progressions show the band gradually coming into their own. The bio with the digital download said the band bring rock influences into the cuts. When I heard some now and then, they mostly serve to enhance the album’s total aggression rather than diminish it. At the same time, quality thrash metal has always survived on its purism and if a thrash band knows how to write and compose properly, softer rock influences are not needed. Running Death do a fine job proving you don’t have to completely change to grow as a band. Their biggest strength is still in their connection to the early and mid-80s. -Dave Wolff