Full Length Review: Amyl and the Sniffers "Comfort To Me" (Rough Trade Records) by Dave Wolff 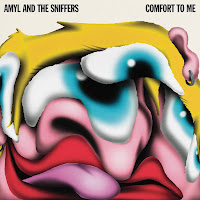 Band: Amyl and the Sniffers
Location: Melbourne
Country: Australia
Genre: Punk
Full Length: Comfort To Me
Format: Digital album, black vinyl
Label: Rough Trade Records
Release date: September 10, 2021
After stumbling upon this band by chance while surfing the web, I'm now learning a little about Australian punk. Amyl and the Sniffers formed in Balaclava, Melbourne, in 2016 and were nominated for many awards by ARIA Music Awards, Australian Music Prize, and National Live Music Awards, among others. Katy Perry and Miley Cyrus can move over, because I suspect Amyl and the Sniffers have the potential to redefine female independence and strength, playing up sexual angles without overt tastelessness.
When the time comes a band or an artist comes along to turn the mass perception on its head. Crawling from the punk movement to fight their way to the validation of winning awards and receiving press kudos for their accomplishments, Amyl and the Sniffers rely on little more than their pub rock/garage band vitality. They strike one, at least from my point of view, as being able to transplace and overturn today’s concepts of class and trash by choosing self-expression over becoming a marketing tool or a label honey.
A fuckload of coverage has been given them since they started, including recognition from Happy Mag who observed Amyl and the Sniffers in The 15 Australian female artists changing the game right now”. Citing everyone from AC/DC to Minor Threat to Cardi B to Dolly Parton as having fueled their drive to write and perform, Amyl and the Sniffers show much in common with classic punk from Iggy to Wendy O and display sufficient pop credibility to turn what is reviled about punk into an advantage.
"Comfort To Me" is the band's latest full-length release following a series of singles, EPs and their self-titled debut full-length from 2019. Frontwoman Amy Taylor has personified grrl power, which has been associated with punk since the late 80s/early 90s, from their debut EP "Giddy Up" (2016). Turning traditional perceptions of women against themselves, she aspires to be a beautiful freak, to find her own fulfillment, to let go of mediocrity and boredom, and to establish herself as a woman and a human. By inspiring others to discover themselves and live before they grow old, she benefits her listeners as much as she does herself.
With each single, EP, and album the band arrived a bit closer to becoming iconic figures like the Blackhearts and the Plasmatics. Their assertiveness grew as Taylor’s commentaries on the expectations associated with becoming successful in popular music grew more pronounced and acerbic. Or maybe she’s not spitting additional amounts of venom at her intended targets as much as keeping a clear head and refusing to be swayed by environments the band is becoming part of as their coverage and popularity increases. AC/DC managed to keep their street cred all these years just by being honest about what they were doing. Showing similar disregard for what is easily accepted by the masses, Amyl and the Sniffers make no secret of where they’re from and hold on to their roots.
On “Freaks to the Front”, “Security”, “Hertz”, “No More Tears”, “Maggot” and “Don’t Fence Me In” the band maintain the excitement of punk’s past glories while Taylor sneers, snarls, yelps, barks, squeals, shouts, yells and screams almost to the point of losing her voice. Her range of emotions, from vulnerability to belligerence, is as engaging as the music written, and it all comes from her own personality. She knows what she wants, and that she can be seductive and sexually appealing without being a victim of label demands or tabloid scandal proves she’s doing her part to unravel and rebuild the image of women in pop. You’d better watch out, if this band represents the new age of warrior women in the music industry many of you may end up out of a job. –Dave Wolff
Lineup:
Amy Taylor: Vocals
Dec Martens: Guitar
Fergus Romer: Bass
Bryce Wilson: Drums
Track list:
1. Guided by Angels
2. Freaks to the Front
3. Choices
4. Security
5. Hertz
6. No More Tears
7. Maggot
8. Capital
9. Don't Fence Me In
10. Knifey
11. Don't Need A Cunt (Like You To Love Me)
12. Laughing
13. Snakes
Posted by Dave Wolff at 11:06 PM