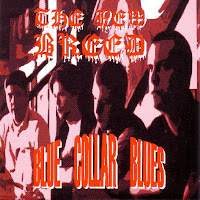 Band: The New Breed
Country: Canada
Genre: Punk
Seven Inch: Blue Collar Blues
Format: Vinyl, streaming
Label: Subprofit Records
Release date: 2000
Returning to Atlantic Canada Punk, I came across “Blue Collar Blues” by The New Breed. Blue Collar Blues is a 7” vinyl released by Subprofit Records.
This vinyl was recorded in 1999 and was released in the year 2000. Featuring Brian Whalen on bass, Chris Meagher on drums, Dave Robertson on guitar, and Jon Stevens on vocals, this Halifax foursome hit hard with this release, and I’m glad it is still getting some play in recent years. With pounding drums, tight vocalizations, catchy bass, and well played guitar riffs, The New Breed managed to snag a new fan. And if at all possible, I would like to help spread their sound even further. Fans of Bad Religion and Pennywise along with other punk acts are sure to enjoy the hell out of this.
Recorded at Deep Nine with design and layout by Dave Robertson. The vinyl had four tracks, but a bonus track from the same recording session is available on YouTube. -Devin Joseph Meaney
Track list:
1. We Believe
2. Never Give In
3. Wasted Youth
4. Blue Collar Blues
5. The Times (Bonus song...not on the 7" but recorded during the same session)
Posted by Dave Wolff at 12:47 PM