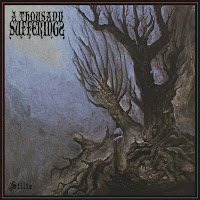 Band: A Thousand Sufferings
Country: Belgium
Genre: Black/doom metal
Full Length: Stilte
Format: Digital album, jewel case CD, standard black vinyl, transparent milky clear vinyl, solid white/black galaxy vinyl
Label: Immortal Frost Productions (Belgium)
Release date: September 24, 2021
‘What an interesting album’ is my quote of the day because that’s what was going through my mind listening to this latest 5 track effort by this band.
You know, you can scope the globe and find plenty of artists in the sea who try to combine various sounds together either on individual tracks or throughout the album as a whole and I’ll be the first to tell you, not all work out. In fact I’d say MOST fail at the execution because there is such a factor of ‘balance’ that most bands don’t have the sense to understand.
For example let’s use Led Zeppelin in my opinion (next to Black Sabbath) the greatest band in music history and they flawlessly combined sounds of
-Country, Rock and Roll, Blues, Gospel, Folk they all had the mutual understanding of how much of each to utilize and where exactly to include the elements (this is excluding Robert Plant’s god level vocal variety) but beside the point, that’s a band that gets it.
This band is the same, each song has a nice hint of something different.
-Black Metal
-Ambient
-Sludge
-Death there’s so many unique and powerhouse sounds all coexisting together on one album and yet flow seemingly perfectly, there’s never any awkward and forced genre and sound transitions or a genre switch so sharp and sudden it threw off the whole balance of the album, it was all in harmony.
Even though these are two different sounding albums, creatively speaking this album reminded me a lot of the band Black Country, New Road and their 2021 album ‘For The First Time’ in how diverse and colourful the production and aesthetics are on this record.
All the instrumentation from the guitar patterns to the methodical drums and bass to the amazing vocal work by the singer, it’s all done with precision, care and power and I love every track!
SO
Without any more hesitation Relentless Family! Come join me in celebrating this effort of greatness and help share this album along! Trust me you won’t regret it! –Corban Skipwith
Lineup:
PJ: Guitars, Vocals
Jurgen: Guitars
Nico: Bass
Timo: Drums
Track list:
1. Geen Helden Meer
2. De Eenzame Veroveraar
3. Woestenij Der Rust
4. Stilte
5. Weerloos In Het Ijle
Posted by Dave Wolff at 7:53 AM