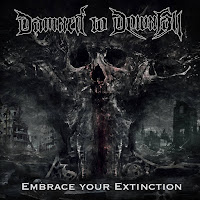 Band: Damned To Downfall
Country: Sweden
Genre: Death/industrial/black metal
Full Length: Embrace Your Extinction
Format: Limited edition digipak compact disc, digital album
Label: Independent
Release date: November 12, 2021
Sometimes when a band tries to ‘experiment’ with a various combination of sounds it can be almost like a game of Russian Roulette because your ambition could either be the death of you or soar you to new heights! And I think on this album the latter was true!
Damned To Downfall -Embrace Your Extinction
So this is a 9 track album that was released in November of 2021 and as many bands go for me this is the first time hearing about this band but after today you can believe me when I say it won’t be the last!
This band combines a few styles that although are you would say are (adjacent) to each other aren’t normally seen hand to hand but that all changes with this as we hear the combination of
-Black Metal
-Death Metal
-Industrial all come together on one stage and fuse pretty nicely!
Production wise I like how they use a very minimalist approach to the ‘industrial’ side of things, although there is that influence heard in almost every track it’s done in only a small dose per song that it gives you that ‘teaser’ if you will of Industrial before ultimately setting its sights on the alternation of ‘Black/Death’ metal throughout the remainder of the track/s.
Also, regarding the ‘Black/Death’ metal it’s not often that you hear a band so fluently go between the two very different styles and sounds and do so without any obvious bumps in the song to make it sound choppy or screwed no they know exactly how much of each sub-genre to use and utilize within each track and that takes some really smart thinking to pull off!
Look, if you’re looking for an album that is
-Heavy
-Extreme
-Stylish
-Nicely Polished then this is the album for you!
They know how to utilize each sound and they have the genius to make a nice, balanced sounding experience despite the use of so many different types of music thrown in! Great band and great album! –Corban Skipwith
Lineup:
Martin Eriksson: Vocals, drums
Marcus Dahl: Vocals, guitars, bass, drums, programming
Track list:
1. We Come In Hate
2. Pharmaheaven
3. Bow For Christ
4. Embrace Your Extinction
5. All Against All
6. The Downward Spiral (Remix)
7. Dominate (Remix)
8. Born To Breed (Remix)
9. Beware The Aware (Remix)
Posted by Dave Wolff at 7:43 PM