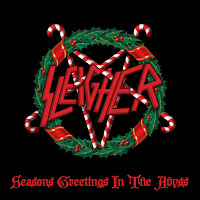 Band: Sleigher
Country: International
Genre: Prog metal
Single: Seasons Greetings In The Abyss
Format: Digital, streaming
Label: Independent
Release date: December 21, 2021
Talk about a ‘Jolly’ time of the year, can you get any more of a badass mashup?
-SLEIGHER ‘Seasons Greetings In The Abyss’
So, what is this wonderful song you may be asking? Well allow me to explain.
What we have here is a special cover of Slayer’s infamous song ‘Seasons In The Abyss’ but remixed and covered by members of such iconic bands as
-Haken
-Dream Theater
-Protest The Hero
-Cradle Of Filth
And Inhuman Condition to help create this holiday banger the likes the world has never seen before!
I mean, look it’s one thing to make a complicated album full of Christmas covers (which is still badass) but to get together a supergroup of musicians like this just to make a Xmas rendition of one of the most hardcore thrash songs of all time? That’s some serious creativity and I love every second of it!
It combines the Christmas cheer with equal parts kick ass metal with newly rendered ‘festive’ lyrics to match! It’s as if these bands came together and said to each other.
'You know what? We all love Slayer here, but I wish there was a way we could play their music in front of our family and children without traumatizing them completely’ and then all of a sudden one of those cartoony light bulbs lit up on top of a person’s head and boom we have this song!'
It’s the definition of a novelty track but one the likes of this I’ve never seen done before. The most shocked and surprised I’ve ever been with a metal-influenced swerve to this magnitude was when Cradle Of Filth released that EP ‘Evermore Darkly’ back in 2007 which featured TECHNO remixes of certain songs, that blew me away (for better or for worse) and on the same level of shock comes this interesting mask up!
So, fill your bellies full of food, neglect that Christmas clean up that no one ever talks about and play this over your speakers and have the joy of knowing you can rock out while the family air guitars in blissful ignorance of the origins! (But don’t worry metalheads, we will know) -Corban Skipwith
Lineup:
Rody Walker: Vocals
Charlie Griffiths: Guitar
Dan Goldsworthy: Guitar
Daniel Firth: Bass
Jordan Rudess: Keyboards
Ray Hearne: Tuba
Jeramie Kling: Drums
https://open.spotify.com/album/4N5cMprOa9PVMXvHpT6pRe
https://music.apple.com/us/album/seasons-greetings-in-the-abyss-single/1601886171
Posted by Dave Wolff at 1:50 AM