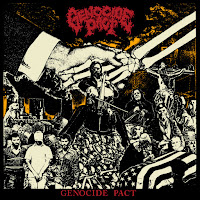 Band: Genocide Pact
Location: Washington, D.C.
Country: USA
Genre: Death metal
Full Length: Genocide Pact
Format: Digital, vinyl, CD
Label: Relapse Records
Release date: December 3, 2021
In my never ending quest for great music, I’ve come across this! Get ready for me to introduce
Genocide Pact -Genocide Pact
So, this is the latest album by the band coming out in December of this year featuring eight of the most grueling metal tracks you’ll hear all year!
If I had to describe these tracks I would have to create my own sub-genre and call this ‘Deathened Sludge Metal’
To me this album has a combination of the slow, methodical pacing of Sludge Metal alongside the Heavy, Unforgiving and ruthless instrumentation of Death Metal.
What I really love about this album is the pacing of it all, it’s all so well-tuned and mastered that it’s just a pleasure to listen to on the mixing side of things, it’s nicely polished (in a good way) and it sounds like they put the effort in to make thing album as crisp as possible upon release.
As I stated above this album (to me at least) share’s a lot of similarities with Sludge and Death Metal and I think although most Death Metal albums don’t incorporate the ‘slower’ pacing I feel the combination works really well here and allows the band to work with so many great ideas and styles that otherwise wouldn’t be open to them had they stayed the traditional route.
I like how at any given moment the album can switch its style and tempo up to suit the song for song narrative presented. Most albums wouldn’t have that level of freedom to just change things up on a whim but because this band has opened itself up to new waves and possibilities it makes for a great sound and an overall great listening experience!
The vocals on this album are great too! The singer really is going out his way to share that soul crushing death growls that at times is border-lining Grindcore territory with just how brutal and diabolical the depth of his grows can go, truly a work of art!
I would highly recommend this album to anyone who’s not only a decorated Metal fan but also someone who's looking for that ‘next new fusion’ of sounds because I have to tell you, although unlucky it works like a charm here! –Corban Skipwith
Lineup:
Tim Mullaney: Guitars, vocals
Demir Soyer: Guitars
Mike Nolan: Bass
Connor Donegan: Drums
Track list:
1. Led To Extinction
2. Perverse Dominion
3. Fossilized Future
4. Mutilated Vision
5. Deprive / Degrade
6. Purged Flesh
7. Barbaric Regression
8. Industrial Obedience
Posted by Dave Wolff at 5:53 PM