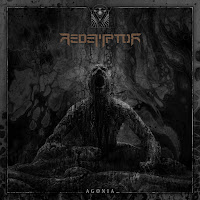 Band: Redemptor
Location: Kraków
Country: Poland
Genre: Technical atmospheric death metal
Full Length: Agonia
Format: Digital album
Label: Selfmadegod Records
Release date: December 3, 2021
What a way to start my review week than with this killer of an album!
Agonia by Redemptor
So this full-length album dropped only three days ago and contains nine new tracks! This is my first time (as is the norm) with me and I have to say they left quite the impression!
Firstly, I think their combination of sounds is quite unique! They bring a certain blend of Death Metal that’s infused with such elements as
-Technical
-Atmospheric
-Symphonic
-Groove and Ambient it’s been a while since I’ve heard Death Metal take such a creative leap in sound, production, and style! For me the last band I really paid attention to in the Death Metal scene that gave me these many interesting switch-ups was ‘Arch Enemy’ and in comparison, they blow them out the water at least as far as creativity is concerned.
Interestingly enough, this album chooses to ‘Sprinkle’ its ‘Indulgences’ of Symphonic and Atmosphere rather than drown in it which is a very unique approach.
Because if we go back and use Arch Enemy as an example most tracks (going back to their debut album) has that level of grand, emotional, theatrical feel to them while on this album you have the stand out tracks like ‘Aurora’, ‘Les Ruines De Pompei’ and the intro to the first track ‘Tectonic Plates’ which all give those goosebump feels of symphonic greatness but it’s really too and far between which for me I’ll be honest feels a bit scattered.
I understand if they were going for a more ‘Less Is more’ approach making you anticipate for when you’ll hear that level of grandness next and I respect that if it was what they were trying to do but for me I just wish they incorporated more of that aesthetic within the album because when they bring it THEY BRING IT HARD!
Look, regardless of my personal gripes, this is a fantastic album that showcases how far you can push and evolve the very ‘Meat and Potato’s’ sub-genre of ‘Death Metal’ and turn it into something artistic and interesting!
I highly recommend everyone go check this out and just support the band! Great work guys! –Corban Skipwith
Lineup:
Michał Xaay Loranc: Vocals
Daniel Kesler: Guitar, vocals
Hubert Więcek: Guitar
Kamil Stadnicki: Bass
Daniel Rutkowski: Drums
Track list:
1. Tectonic Plates
2. Potion of the Skies
3. Tar
4. Further from Ordeal
5. Excursus Ignis
6. Aurora
7. Debris
8. Wounds Unhealed
9. Les Ruines De Pompei
Posted by Dave Wolff at 1:53 AM