Interview with Fabio Bava of LECTERN by Dave Wolff 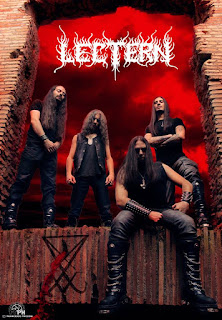 Interview with Fabio Bava of LECTERN
Lectern’s inspiration was United States death metal, particularly bands from Tampa, Florida. What about Tampa death metal appealed to you?
Florida death metal always led the movement. Basically it was an emanation of thrash metal, which in the first half of the 90's was part dead and part full of Botox to hide the wrinkles for lack of new ideas. Many bands lost interest in playing aggressive metal. This is the reason death metal, which existed in the 80's with only a few bands, founds its way with a new, brutal style. I guess it is useless to mention Metallica were without an exact future after their fifth record.

There was another delay between 2010 and 2014 when your self-titled third album came out. In this time did you form another lineup and compose material for this recording?
I met Enrico in 2012 and he had some new riffs. He went to Kick Recording Studio, tracking all of them with the drums for a demo. I still had all the lyrics. In 2013 Pietro and Marco joined Lectern as second guitar player and drummer.

When your release Lectern came out in 2014, how much of an improvement was it from your previous two albums?
It seemed to be quite technical, like Golgothanean and Libidinal Tabernacles. After the release of Lectern, we maintained the previous three tracks in Fratricidal Concelebration. The final songs we arranged were more complicated to play, for example Labial Of Inveigher and Genuflect For Baptismal Transubstantiation. Their style was so varied, a mix of old blackened school and technical brutal death metal. The sound was tiny and clean in the guitars but the critics appreciated them.
Your bio says many different musicians were involved in the making of Fratricidal Concelebration. Who are the people who helped the band and how did you hook up with them?
I worked with a lot of musicians. I hired them through Facebook for Pietro, who consequently spoke to me about Marco being our drummer. Enrico is a longtime friend, I personally knew him since 2005 and got in touch with him in 2012 for playing together in Lectern. He left at the end of 2014 for job reasons, and moved out from where we used to live.
Did your 2016 full length Precept Of Delator expand on the technical improvements of Fratricidal Concelebration?
I don't think so, I can't tell you that Precept Of Delator is a technical death metal album. Perhaps some passages in Fratricidal Concelebration were astonishing but that's all in my opinion. Remember that we tracked our last new album in three, as Gabriele Cruz entered Lectern only a couple of months after we mastered at The Outer Sound Studios. There is a great attention, for example, that we need at least one guitar solo in every of our songs, just not to lose the heavy metal aspect. Instrumental passages are not a signal of technical death metal at all!
How long did it take Gabriele Cruz to learn the material on Precept Of Delator after he joined the band? What does he contribute to the band musically? How about the rest of the current lineup?
He took a couple of months, but many longer as he had to learn as well some riffs. Gabriele is not writing any song at the moment, as we wait to consider his riffs too.
Who mastered the final recordings at The Outer Sound Studios with the band? Would you and the band rather record at a professional studio or record at your own recording studio?
Giuseppe Orlando was behind the desk, assisted by Alfonso Corace. No home recording, just professional studios always!
How would you rate the equipment and recording materials at Outer Sound? Have you or would you recommend the studio to bands you are friends with?
Superb! It is an excellent studio, with a professional engineer like Giuseppe and his pal, Alfono. There are also great musicians and metalheads, so there's no better place to consider for tracking! I recommend absolutely, to reach The Outer Sound Studios.
Do you have any promotional videos filmed to help support Precept Of Delator? Tell the readers about the making of the video or videos.
The title track clip has been issued before the end of the last year, with Palpation Of Sacramentarian just before Christmas, two overall. We have others filmed, just to be released yet
Have the lyrics you write for the band improved as much as the band’s technical capabilities? Which of Lectern’s songs are the finest examples of your lyrics?
I never thought that my lyrics could ever enhance like the band's skill! My words are gonna be complicated in their meaning, especially the titles of our next songs. For the riffs maybe, but I don't think so.
Does the band preview their albums on social media, or are they strictly available on physical CDs?
Both, as we don't disdain cassettes, tapes or vinyls!
Is the band touring or playing local shows to promote the new album? Have you ever performed outside Italy while you’ve been active?
We focus on these both sides, as we prefer to play outside our country!
Does Lectern have any material to appear on another full length in the future? How soon do you expect to start working on it?
We are arranging the new songs, we have ready half of the new record. We will record and release it in 2018!
How will the new album be a step ahead for the band, and how do you intend to promote it when it is released to the public?
There are some tempo clicks we never played, I think in the first song we have arranged for the new studio album. Also parts of the breaks, licks and leads are different than the others we made. The method has changed to propose new arrangements, but we only have half the new record!
DISCOGRAPHY
Bisbetical (1999)
Salvific Of Perhaps Lambent (2010)
Lectern (2014)
Fratricidal Concelebration (2015)
Precept Of Delator (2016)