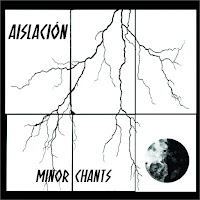 Release Date: January 9, 2018
If I correctly read their Facebook information, Mexico’s Aislación was formed by ex-members of A Naked Soul who were an active doom/death metal band from 1993 to 1997. On their debut four song demo Minor Chants, Aislación carry the doom/death banner hoisted by A Naked Soul in the early 90s. The occasional boredom I felt with doom and stoner was due mostly to its repetitiveness and overindulgence in song length. Over the past year this has been changing for the better, as more unsigned bands are taking new liberties with those genres. I’ve heard of more bands like this from the independent labels, which reminds me again of the value of the D.I.Y. industry and the talents it has to offer. This value can’t be absolutely measured by arguments concerning marketing or revenue. Aislación substantiates this as they are not your typical doom/stoner band. From the intro track Apotegma to the opening strains of Drunken Forest, we have a different interpretation of the formula doom metal and stoner rock in all its categories and subgenres is built upon. Incidentally, Apotegma samples a speech from 19th/20th century political orator William Jennings Bryan, who was a dominant force in the American Democratic Party from 1896 to 1925 as well as an opposer of Darwinism. Just a little trivia that should give you insight into the band’s world view in relation to the sampled quote. As far as their songwriting and originality, the downbeat, disconsolate treatise we’re familiar with from doom and stoner is redirected through rasping, gravelly guitars owing as much to early thrash metal as it does to Black Sabbath. While most doom and stoner has its share of distortion, Aislación is more like a scorching, red hot razor dissevering your brain than sweeping in woeful, distressing waves. The band’s manner of conveying these sensations cannot be conveniently categorized. Their grittiness relies more on volume than distortion, the lead vocals sound more pained than melancholy, a greater amount of tempo changes surface in less time, and melody and raw energy are emphasized more than usual. All this put together forms an exclusive style of doom metal, a strength the band should capitalize on for future releases. They have some influence from death metal as well, though it doesn’t show until Animism Seed. Once this influence takes hold, it dominates much of the material with strappy thrash elements. Whether it’s added deliberately or not, it helps reinforce doom metal’s hypnotic qualities without getting monotonous or tiresome. The band could polish their material at least a little next time they’re in the studio, if only to grow tighter and more cohesively put their ideas across, Regardless of this complaint Minor Chants is a good start to what can be an auspicious career for Aislación. -Dave Wolff