Full Length Review: HAEMORRHAGE We Are The Gore 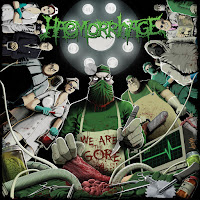 HAEMORRHAGE
We Are The Gore
Relapse Records
Release Date: October 6, 2017
Why have I never reviewed Haemorrhage before? Half way through listening to "We Are The Gore," a more recent album by the band, I realized that this is something that needed to be done. This band has put out many previous releases, an earlier album titled Grume being one of my favorite "gory" relics of all time. This album is just as good as anything they have done in the past, enhanced slightly with improved production. Down tuned guitars chug along next to grindy shreds tinged with great atmosphere. The vocals, both high and low are chaotic, ever so slightly adorned with gurgling undertones. The drums are both metal-ish and grinding, beats of various speeds blowing my mind as always. Check out this album, it is a great piece of gore! Just hope that one day you never come across Doc Obnoxious, who is known to come around if he hears the sound of Haemorrhage... watch out! -Devin Joseph Meaney