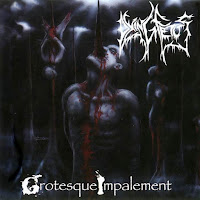 DYING FETUS
Grotesque Impalement
Blunt Force Records
Release Date: 2000
I am now realizing that I have never done a review for Grotesque Impalement by DYING FETUS. This is a shame, as this song alone is pretty much responsible for the rise off my interest in extreme music. I had been listening to thrash metal and mainstream punk rock since I was about eleven. When I was twelve or so, my cousin gave me a bag of thrash cassettes. For years I listened to these religiously, but one fateful day, my interests were peaked to an entirely new degree. When I was thirteen or fourteen years old in the eighth grade, a guy who was in my class asked me if I had ever heard of the band DYING FETUS. He told me it was some pretty extreme stuff, his brother had showed it to him. He told me to look up a song called ''Grotesque Impalement.'' He did not like it himself, but he figured that I might enjoy it due to my musical tastes. When I got home, I looked up the song Grotesque Impalement on my computer, an old-school Dell.
What I heard completely blew me away. It was one of them moments like in the movies where your hair flies back due to the violent sound-waves, your teeth chattering as the metal vibrations coursed through your body. I listened to the song on repeat many times, and I soon knew I was hooked. I looked up the whole album, The ''Grotesque Impalement'' EP. This whole EP was mind blowing. My young teen brain could barely handle it! I sent the album to all of my friends. Most of them did not get it, but there were a few who knew this EP was pure gold. It started at thirteen or fourteen, but I still listen to this album to this very day. This is not the only good album they had. I love all of the DYING FETUS albums, new and old.
A fun fact, The song ''Grotesque Impalement'' was originally on an old demo tape that the band had put out in their earlier years. The version that I heard first was actually a remake put out years later. There is so much I could say about DYING FETUS, but I could go blue in the face. My mind would race and explode as all my questions and realizations came to fruition. I guess I have one more story though. When I was seventeen or so, DYING FETUS came to Halifax, a city roughly four and a half hours from my town. It was nineteen plus, but I was determined I was going to sneak in some way. I even grew a beard, to try and seem as if I was older. I didn't end up getting a drive, and to this day I am bummed about the day DYING FETUS came around and I was not there. (Come to Cape Breton, Nova Scotia. Do it, DYING FETUS!) I guess all I can say now is that the Fetus will forever be one of my favorite bands, their style the reason my musical works are what they are today. DYING FETUS is a great band, and you should really listen to them. -Devin Joseph Meaney