Full Length Review: DESALMADO Save Us From Ourselves 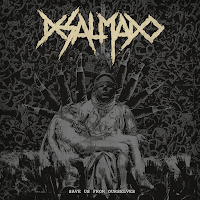 DESALMADO
Save Us From Ourselves
Black Hole Productions/Helena Discos/Independent
Release Date: February 6, 2018
The independent label/distro Black Hole Productions is one I remember from the latter part of the 1990s. Its founder Fernando Camacho was also publishing a zine related to the label when I got in to contact with him. After being out of contact for years, I was given an advance stream from the Brazilian death/thrash/grindcore band Desalmado, due for release next month. Desalmado has been active since 2004 and spent most of their fourteen years traveling on the road to promote their style of brutality. 2016 saw the band touring Europe for the second time, performing to fans who appreciated the energy they put across onstage but didn’t fully get the message they were putting across in their lyrics. The latter is of significant importance to Desalmado as they decided to record the new album with English-written lyrics in an effort to reach more listeners. To quote frontman Caio Augusttus, "Save Us From Ourselves is by far our most critical album… which most clearly exposes how dissonant the model created by a capitalist society is, and it also proposes a way of engagement through mobilization by the people, be it the workers, oppressed races, women..." The relentlessly pounding music was written and composed to be extremely intense as a vehicle for the lyrics; together they almost sound like one entity with each having equal importance. The compositions are instantly distinguishable from the others in disposition, with different helpings of heaviness, brutality, atmosphere, dissonance and some tribal percussion reminiscent of Sepultura on Chaos A.D. and Roots. Producer Hugo Silva and masterer Absolute Master show adeptness at spotlighting their influences in death metal, grind, hardcore crust and black metal from song to song. You don’t have to have a political agenda to appreciate the position the band takes on governmental issues as speaking out became a logical progression for underground metal bands and their rebellious attitudes. As a brief aside, I remember reading a review about the 1979 movie Over The Edge which stated without that teenage angst surviving into adulthood there would be no civil rights movement or any other movements for that matter. In this sense Desalmado prove it pays to stick to your guns and “growing up” is not becoming complacent with your surroundings and accepting that the status quo is always right, The review of Over The Edge is what I think of when reading the bio accompanying the album stream. Even without a lyric sheet I get a sense the band put tremendous amounts of thought into the lyrical content. Jeca Paul was hired as cover artist as his work for the front cover and featured in the promotional video for It’s Not Your Business was deemed as befitting of the band’s message. The cover reminds me of those featured on album covers all the way back to Napalm Death, Cryptic Slaughter and Sacred Reich. For an album that is not even out yet, it shows a great deal of promise for the coming year. -Dave Wolff

Track list:
1. Privilege Walls
2. It's Not Your Business
3. Save Us From Ourselves
4. Black Blood
5. Blessed By Money
6. Bridges To A New Dawn
7. Corrosion
8. Binary Collapse
9. Exist and Resist