Full Length Review: CORROSION OF CONFORMITY No Cross No Crown 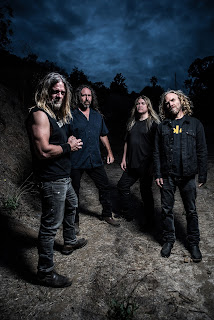 CORROSION OF CONFORMITY
No Cross No Crown
Nuclear Blast Entertainment
Release Date: January 12, 2018
I find it ironic that Corrosion Of Conformity are being referred to as a legendary Southern rock band, as Eye For An Eye, Animosity, Six Songs With Mike Singing and Technocracy are considered hardcore/crossover classics. This isn’t a criticism but an observation as those releases came out between 1984 and 1988 at the height of crossover. I reiterate this was a time when it was gritty, seedy and born of the sweat and hard work of dedicated musicians, not affluent producers and flavor-of-the-month pop icons who too long overstayed their welcome. But despite the passing years, C.O.C. displayed admiration for Black Sabbath since the time they covered a riff from Sabbath’s Cornucopia in College Town (from Eye For An Eye). I hand it to them for retaining their affinity through their early hardcore/crossover years, their groove metal/stoner rock periods, their decline in popularity and return in 2005 with In The Arms Of God, their reformation with bassist Mike Dean, and their reformation with vocalist-guitarist Pepper Keenan. Their natural evolution proves definitively that bands can mature and progress on their own provisions. The test is whether bands can mature, progress and release timeless, relevant music, with no additional effort other than writing what they feel. Placing No Cross No Crown alongside the promotional videos made for Dance Of The Dead, Vote With A Bullet, Albatross, Clean My Wounds and Drowning In A Daydream you can see C.O.C. still does what they feel comfortable doing, preserving the grittiness of their nightclub days. Popular music still needs such bands, and the reasons are impenitently displayed on No Cross No Crown. Listening to their old songs and the songs appearing here, I hear their energy and drive has lasted while grunge and alternative became trends and gave way to pop-punk.  I can forget that CBGB, Wetlands, Slipped Disc Records and Bleecker Bob’s have become the stuff of memories and appreciate the album as if it was twenty years ago. No Cross No Crown’s similarities to Black Sabbath are made even more apparent by the brief interludes between songs such as Novus Deus, Matre's Diem and Sacred Isolation. I read a statement from drummer Reed Mullin that the band took their time recording the new album without forcing or rushing it, which shows in Cast The First Stone, Wolf Named Crow, Little Man, Forgive Me, Nothing Left To Say, Old Disaster and A Quest To Believe (A Call To The Void). Another statement from Keenan explains the concept uniting the album was born when the band was touring in England. It was in a former church turned into a performing arts center: “The dressing room had stained glass windows and one of them showed this poor fella being persecuted. Underneath it said, ‘No cross no crown.’” Using this as a catalyst to base the songs on, the band intend the album as a vehicle to remind people to remove their good guy badges, religious facades and professed piety and genuinely look out for one another, especially these days. So when reading between the lines you should be able to tell the idea is the furthest from blasphemy. -Dave Wolff