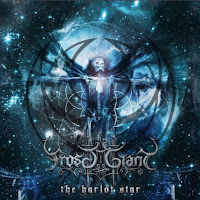 FROST GIANT
The Harlot Star
Transcending Records
Release Date: January 19, 2018
The other day I was sent The Harlot Star, the debut full length offering from the band FROST GIANT. After listening to this in full, I realize that this is not quite as heavy as most of my musical interests. Still, I highly enjoyed this, as a lot of these tracks were quite peaceful, offering a break from my usual audio assault of black-metal and grind-core. All I can really say about the first track “The Harlot Star,” is that it is a beautiful instrumental. I need not go further, as I feel that sums it up quite nicely. The second track, “Forgive Me Not,” is very heavy with some impressive intricate solo work. The drummer is clearly talented on this track, I can say this without question. Vicious gutturals pair nicely in this track with melodic vocals, both male and female. The Third track “Apostasis” is yet another beautiful instrumental. Although this is clearly inspired by some heavy metal, I can only assume that the people behind this have some classical leanings. “Curse of Doubt,” the fourth track, has a heavy start, the instruments and vocals both aggressive. This track slows down a bit mid-way, the sound giving a depressive yet awesome atmosphere. The guitar work is phenomenal, catchy licks adorning this track throughout. “Exile in Storm” had what I thought was an epic vocal intro but I realized soon that the whole song is done in this style, a pleasant sing-along that is heart-felt and warming yet cold at the same time. I was not expecting this, but I dig it. “Prisoners of the Past” has catchy intro keys, instruments I cannot identify being played well in the back ground. This track is very up-beat with heavy gutturals. With melodic vocals both male and female, for some reason this track reminds me of pirate adventures. The seventh track, “Ashes Among the Earth,” is yet another peaceful instrumental. The keys near the end are really nice, bringing me to a state of peaceful serenity. “The Forgotten Graves” is absolutely crushing. With shreddy solos leading to a softer center, the softness soon destroyed with an attack of heavy strings. “Of Clarity and Regret” has heavy solos and crunchy rhythms, but what got me most was the peaceful ending to this track. I love the loud stuff, but every now and then I like something a little bit lighter and this worked well for me. “Monuments of Nothing” drives forward with more waily solos, once again reminding me of random pirate adventures for some reason. The female vocalizations are what I enjoy most on this track. The final track “Perpetuum et Aeternum” once again is a beautiful instrumental, taking this wonderful release to a close. If you are in the mood for a release that is both violently heavy yet peaceful and serene in parts, I suggest checking out this album. Years in the making, I can honestly say the time spent on this album was not wasted. -Devin Joseph Meaney

Track list:
1. The Harlot Star
2. Forgive Me Not
3. Apostasis
4. The Curse of Doubt
5. An Exile in Storm
6. Prisoner of the Past
7. Ashes Among the Earth
8. The Forgotten Graves
9. Of Clarity and Regret
10. Monuments to Nothing
11. Perpetuum et Aeternum