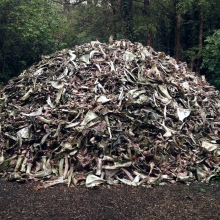 BRIQUEVILLE
II
Pelagic Records
To be released September 29, 2017
A band shrouding itself in mystery to invite the unsuspecting into their dark recesses, Briqueville present their music and stage persona as one essence. Unlike Mataniak whose performance video Touch Of Silence I reviewed this month, this band personifies a purely occult ritual that must be encountered personally and contiguously to be appreciated. The question as usual arises of what the band have to offer underground music that is all their own. With songs lasting from eleven to nineteen minutes, their ritual slowly and progressively takes hold of you until you are completely immersed. The mystery they bring to the stage is based on an impersonal sense characterized by the donning of ritual robes and masks onstage and even during rehearsals, to call attention solely to their compositions. This sounds simplistic but once you hear their material you’ll get a sense of substance over style you hadn’t expected, but in many ways it takes patience. The band is as minimalist musically as aesthetically, constructing most of their material on a single note and taking complete license with it. Conceptually they’re the same; their imagination was sparked during a chance meeting when a stranger passed them a news article he had kept in his possession for seventy years. II is their second full length, following their self-titled debut album from 2014, and if you thought Sunn O))) were heavy you have to see how well Briqueville surpasses most doom metal bands. I had to turn the volume down while listening so as not to disturb anyone within earshot. The musicians comprising the band were involved in other situations in their local jazz, metal and electro scenes, and in addition to their minimalism you hear noise, grit, atmosphere and the shadowy themes you sometimes hear from jazz music. If you listen closely enough you likewise might hear Pink Floyd. Often a song goes from one mood to another that seems strangely detached from the last. In each section the riffs and progressions are repetitive to the extent of somnolescence, then comes an unexpected break into a new section. It all makes sense however when taking in the complete picture. The more you listen, the more you realize how each new section builds on the last. Each section of each song contributes to a narrative that is breathtakingly dramatic and allows for an appreciation of the catharsis you experience in the end. This catharsis cannot be fully comprehended until you listen to this album for yourself. Do so late at night with all the lights out. Pre-orders are available at Pelagic Records. -Dave Wolff