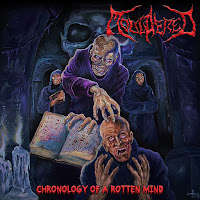 MOULDERED
Chronology of a Rotten Mind
Satanath Records
Normally I'm cynical concerning modern death-metal groups due to several factors. Often it's that the production is too polished or too unbearably lo-fi, or just that the songwriting is plain and rehashed. Mouldered are indeed a modern death-metal band but I actually like them as they aren't tarnished with the same negative qualities. 'Chronology of a Rotten Mind' is a short but pleasantly compact album. The production is somewhere in between the realms of glossiness and grit to avoid sinking into the pit. It's something they've managed to do efficiently and I'm admittedly proud to make that statement; I don't feel they've garnered the attention they deserve. Now for the burning question: Do they have an unmistakable quality which makes them instantly recognizable? The answer is a solid no. Usually I'd use that as a whipping post but for this group I make an exception. On the surface one might say they're generic; while that statement may be true they have something other groups don't have: - the ability to write decent songs. They're bloody good songwriters, particularly in 'Mind Control' which features exciting choppy breakdowns and high-velocity double-bass fills. All of the record is pleasing as the riffs that define it are quite catchy. While there's nothing extraordinary about the inner stylisations Mouldered have set for themselves there's talent particularly in their percussive side. Mouldered is a band I will champion as they've managed to take the late-80s aesthetic of Death, Immolation and Necrophagia and combine it with high displays of rhythmic diversity. They're the epitome of a strong and functional group. -Jaime Regadas