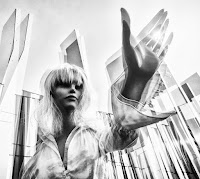 DEAD SEASON
Prophecies
Dissonances Records
If you're looking for a modernized heavy metal group that conglomerates melodic sensibility and technical efficency at the base of the melting pot, look no further! Dead Season were formed in 2010 and have proven themselves to be a formidable force of energy with their newest album, 'Prophecies', an hour-long hybrid of bone-crushing riffs, memorable choruses and intricate drum patterns. One may initially consider themselves a tad weary due to the demanding length of the album, but worry not! Each new moment is as enjoyable as the next and there's always a new theme commonly introduced to keep one entertained throughout the record. Songs like 'Homogenetic' and 'Mind Entertainment' are clear examples of how accomplished these musicians are at their craft and the sheer intricacy of the arrangements are indeed at times quite astonishing. They don't overdo it, though. 'Prohibition of God' is rife with memorable choruses that pay a certain homage to groups ala Nevermore who seem to be one of their biggest influences. There's a lot of attitude, too, not just musically speaking, but also thematically there's a lot of grit. Samples appear sporadically throughout the record which also adds to the conceptual darkness the group are keen to explore. 'The Four Minutes of Hate' is a wacky instrumental for a group such as themselves and it is full of diminished phrasings that can often creep their way into chord progressions in other tracks. What I personally really dig about the group is that they're not tied to conventionality in any shape or form. The guitar solos are frenetic yet comprehensible and the drumming is soul-crushing yet convoluted and tricky. If Nevermore and Coroner had a rebellious offspring this album would certainly be one of its proudest creations. An immensely enjoyable affair that has the ability to prompt even the most reluctant headbanger into physical bursts of euphoria while still maintaining their essence within the depths of thought-provoking sincerity. -Jaime Regadas