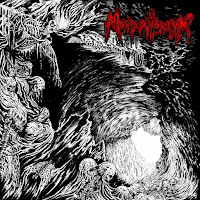 MORDATORIUM
Obsessed With Death
Independent
Mordatorium on Facebook
Mordatorium on Bandcamp
Mordatorium on Youtube
Mordatorium on Twitter
Death metal exists in many forms. There's the raw, the technical, the slow, the fast and all of which come in between. MORDATORIUM are a group that will please fans all across the death metal spectrum, particularly those of the Swedish acts of the early 90s. Their new LP, 'Obsessed With Death' is a strong, compact release consisting of nine stellar tracks with immediate hooks. They're the type of death-metal band I personally like. They don't showcase an excessive usage of blast-beats, in fact I'd be lying if I said there was a real blast-beat section in the album. Instead they place more emphasis on solid mid-paced grooves that you can slot yourself into. Everything about the group relates to the standards they've set for themselves and whether that's a good or bad thing is purely subjective. I wouldn't say they're profoundly unique and they're not going to be instantly recognizable on a death metal playlist but seldom one finds a group in that category that do indeed have their own distinct identity due to the confines of the sub-genre. For what they do, however, they're a fine addition to a death metal compilation of sorts and there's definitely a few songs I'd add into a playlist. 'The Culling', for example, is a really good slab of intensity and 'Murder Castle' draws from the lyrical themes of 19th Century serial killer H.H. Holmes. Fundamentally driven by several changes in its verses and choruses it proves a solid piece. All of the songs are good for what they are but at this point in time they don't have a quality that sets them aside from other groups. What I do find interesting is that there are flashes of polyrhythmic interplay between the rhythm section and the riffs that drive it. Most times it works really well though on some occasions it can sound a bit disjointed and choppy. 'Beheaded', for instance, is led by a verse in which the rhythms seem to be at a constant battle with the guitars. If the discrepancy in timing is a direct reference to the track's title, ie. the rhythms being the body that carry the song and the guitars being its head then I can definitely see its artistic connotations, though I'm not entirely sure if the subject of decapitation has really evoked such a high level of intricate representation in the past. Andrew Oosterbaan, the group's chief guitarist and bassist also handles vocal duties. I can definitely hear a lot of Tom G. Warrior in his melting pot of influences. On drums you have Pearl Kacew who seems to have established herself as the group's spine. I really can't imagine any reason why a death metal fan wouldn't enjoy them. Good songwriters, decent lyrics, catchy riffs and songs about serial killers is, at least for me, a defining quality of what constitutes traditional death metal. Overall it's a strong record and there wouldn't be a single track I wouldn't add to a compilation album. -Jaime Regadas