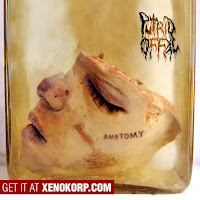 PUTRID OFFAL
Anatomy
Xenocorp
It is almost time for bed and I was sent ''ANATOMY'' by PUTRID OFFAL. This short release is great! They market themselves as death/grind , but I can hear some gory influences as well. Fans of (early) CARCASS and THE COUNTY MEDICAL EXAMINERS will lap this one up like a dehydrated puppy dog at the pond. I find most of the modern death-metal can become pretty boring after a while, but PUTRID OFFAL is just what the doctor ordered for me. The two studio recordings alongside the re-recordings are great. Hell, even the live tracks tacked on at the end are well worth listening to. Just one more band putting FRANCE on the map. This band has been around since 1990, and I have heard them before. This release has managed to grab my attention though. I will be listening to more PUTRID OFFAL in the future. These blood-splattered hymns need to become permanent in my anti-musical collection. Good job PUTRID OFFAL. Stay sick. -Devin Joseph Meaney