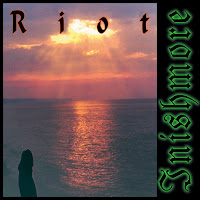 RIOT
Inishmore (Bonus Edition)
Metal Blade
Inishmore is one of three albums Metal Blade is re-releasing from Riot as special editions; the others are their 1998 studio effort Sons Of Society and their 1998 live recording Shine On. These albums were released on CD and vinyl format for fans and record collectors June 30, remastered by Patrick Engel and featuring bonus material. Released in Japan in 1997 and the U.S. in 1998, Inishmore was chosen for re-release for being an important representation of classic American power metal. Considering this I personally would have liked to see Metal Blade re-release their earliest discography (1981’s Fire Down Under, 1982’s Restless Breed) as they were among the first American metal bands (with Twisted Sister, Virgin Steele etc) and I missed said recordings the first time. The band formed in 1975 and released their debut Rock City two years later. Over the years they perdured through a substantial amount of lineup changes and a few personal tragedies, until the lineup stabilized in 2013/2014 with vocalist Todd Michael Hall, guitarists Mike Flyntz and Nick Lee, bassist Don Van Stavern and drummer Frank Gilchriest. As Riot V they released Unleash The Fire in 2014 but nothing new has been recorded by them since then. The label’s web site says they have a handful of shows scheduled for October and the band’s web site says they made some summer festival appearances (Bang Your Head, Skulls Of Metal); for the most part it’s been quiet with them at present. Metal Blade are still treating the band quite well reissuing their albums from the 90s in the hope of generating new interest. The bonus edition of Inishmore is fitting to introduce new fans to, especially if you like classic metal, power metal, prog/classical metal, Celtic music and Irish folklore. I’ve long been attracted to the latter so I jumped at the chance to check this album out. Inishmore is an ambitious effort for the band, that at the time of its release consisted of Mike DiMeo on vocals and Hammond organ, Mike Flyntz on lead and rhythm guitar, Pete Perez on bass, Bobby Jarzombek on drums and Mark Reale on lead and rhythm guitar, 6 and 12 string acoustic guitars, backing vocals, mandolin. Hammond organ and string arrangements. Reale who also produced the album passed away in 2012 but his work with the band is exemplary. Retaining their late 70s/early 80s roots, the band is incredibly tight and balance the subgenres cited earlier with musicianship deserving of comparison to Yngvie Malmsteen. The bonus tracks, namely 15 Rivers, Red Reign and Irish Trilogy, stand well next to Angel Eyes, Kings Are Fallin, Cry For The Dying and Turning The Hands Of Time. Inishmore is available on Digi-CD and four vinyl editions: black, night blue/violet marble, lime green and exclusively to the States, red. -Dave Wolff