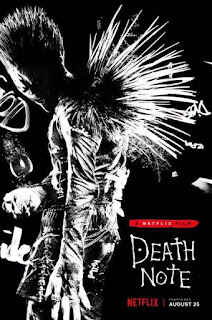 Death Note
Horror
August 25, 2017
A Netflix Film
Director: Adam Wingard
Producer: Jonathan Eirich and Brendan Ferguson
Starring: Willem Dafoe, Lakeith Stanfield, Nat Wolff, Jason Liles and Margaret Qualley
Light, a high school boy, finds a mysterious book titled Death Note that fell from the sky. The demon or Death God has rules but the jest is that who’s ever name you write in the book dies. Light decides to go on a crusade of justice and write the names of people who have done wrong that he feels doesn’t deserve to live. It isn’t long before “L” who is a specially trained investigator is hot on Light’s trail.
Death Note has been popular for many years in Asian countries however Netflix with the help of Adam Wingard who is very well known for his horror movies, decided that it was time to bring the animated series to the silver screen in a non-animated way and with a bit of a different twist.
There have been a few mixed reviews since it was previewed at the San Diego Comi-Con earlier this year however, I think that those who gave it negative reviews are far more fixed on the anime series rather than something that was adapted for those in the United States.
Defoe delivered the Death God’s voice and personality flawlessly and I mean the voice was believable from the raspy voice right down to the evil laugh.
Having never seen the animated series that was so popular in the Asian countries, I can honestly say that this is a movie that I found to be very memorable, it held my attention and I loved how Wingard embedded some scenes from some other horror movies in the back ground on the television.
Light decides he’s going to use this book to rid the world of those who have committed crimes such as murder, rape, robberies and the like rather than to use the book for nefarious reasons. Little does Light know that even trying to be the hero also comes those who would hunt him down to stop him, label him as a murderer or worse, betrayal by those who would want to take possession of the book to do worse things like taking revenge.
I think that perhaps people should watch this as it is rather than compare it to its counterpart. Though some things are the same most is not and since when is adapting something to fit another culture such a bad thing?
I look forward to watching this movie many times over the years! -Roberta J. Downing

This review can also be read at The Critic Corner E-Zine. -DW
Posted by Dave Wolff at 8:13 AM