EP Review: LYNCH PIGS The Art Of The Squeal 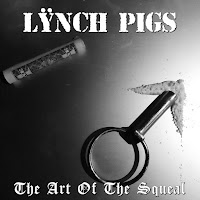 LYNCH PIGS
The Art Of The Squeal
Independent
The Long Island scum rockers Lynch Pigs have five new reasons to bitch about taking offense to them, if your preconditioned politically correct mindset obstructs you from seeing their dark humor. If you’re a Mentors and GG Allin fan (as my review of their EP anthology Forced Entry/Livin’ Dirty indicated), The Art Of The Squeal isn’t as severe but a worthy successor to the ground those artists paved in their heyday. But don’t expect to be too desensitized as this band has a blow or two ready. Discovering Lynch Pigs was like a breath of fresh air for me. When they opened for the Murder Junkies in 2016 I had no doubt I was being presented with the trashy, sleazy debauchery of NYC’s East Village they brought to the Long Island suburbs. This chance meeting couldn’t have happened at a better time, when it seemed the local underground was permanently buried for some time. Tower Records, Slipped Disc and Empire Records were gone as were long running zines like Under The Volcano. For the most part it seemed to all be over, when the 2010s saw new bands crawling from the sewers into the local club scene. As you can gather from their interview, and from their Youtube channel, Lynch Pigs represent the exact opposite of what is expected of Long Island bands, with unglamorous musicians who resemble bikers rather than pretty boys, a scruffy vocalist barking and growling politically incorrect lyrics, women strutting their stuff with crude sexuality and musicianship intended to send fans of Bon Jovi and Justin Bieber run screaming out of the club. Their show is the closest you’ll come to the old Avenue A without actually being there, and again they capture the experience in all its filthy glory here. The EP sounds recorded live in a rehearsal room. Instead of being detrimental to their sound it enhances the dynamism they project onstage. You will feel as if you’re there watching the band practice in preparation for one of their shows. The lyrical content is as raw as the sound, kind of like sleaze rock with all its accessibility and mainstream friendliness rubbed away with sandpaper, but still designed to raise a smile or a wince depending on the mood you’re in. This is just the band to suit your sick, twisted tastes. -Dave Wolff