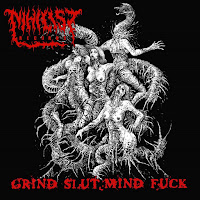 I recently received a parcel in the mail from NIHILIST RECORDS. Within that parcel was a compilation pro-CD called ''GRIND SLUT MIND FUCK''. Due to my previous affiliation with this label, I was expecting the majority of the tracks on this beast to be different variations of noise and grind. Although there was a fair portion of noise, there was also a decent amount of high-production extreme metal. A few of the bands released on this compilation have also been released in some way or another on my D.I.Y label Gorecyst Records. Over half a decade ago we put out a split tape that featured Zombie Raiders. A few years later we released a BLASPHEMATION dub cassette. Both of those projects were featured on this compilation and it is really nice to see that both these projects are still active and involved within the underground scene. This is without a doubt one of the better releases put out on NIHILIST. Everything on NIHILIST is worth listening to, but this compilation CD is a gem within the label's collection. NIHILIST RECORDS is run by ''Cire Narg'', and you can find him on FACEBOOK and other random locations all over the internet. We met in 2010-2011 when his band BLASPHEMATION and my old band PROCTOPHOBIC were released together on a split disc. In conclusion, NIHILIST has only been a label for a few years, but Cire is working hard at bringing the sounds of the underground to your virgin ear-drums. Buy this album and others to support the dark abyss that is NIHILIST RECORDS. I guarantee you will not be let down. -Devin Joseph Meaney
P.S: My old blackened gore-grind band released a ''Greatest Hits'' CD on NIHILIST RECORDS. For only a few U.S dollars, you could also own that piece of ''art''. NIHILIST RECORDS FOR LIFE.