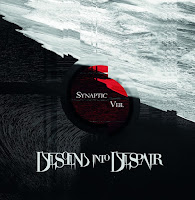 DESCEND INTO DESPAIR
Synaptic Veil
Loud Rage Music
Amidst the realms of a seemingly circumscribed sub-genre such as the newly-coined 'Funeral doom' lie groups who are willing to push the boundaries and incorporate a wider armour of instrumentation and structural design. Descend Into Despair's 'Synaptic Veil' is no exception to that statement. The album spans a whopping fifty-five minutes marked by five tracks of somber reflection blended carefully with feelings of angst and aggression, almost akin to a ferocious animal whose only destiny is to succumb to the tranquilizer. Musically speaking, the group are categorized by slow and brooding riffs with a strong penchant for orchestrative layering. Dynamics play a large role, too, for if a section begins to feel a tad lengthy it doesn't take too long before the theme shifts into something a tad different. The height of such dynamics can be found in tracks like 'Demise', the longest track of the album which features a nicely grandiloquent mid-section. Vocal-wise there's an interesting alternation between melodic phrasing and growling accompanied by the occasional bordering upon spoken word. 'Tomorrow' is also fourteen-minutes long and features a lot of harmonized lead guitar lines which doesn't detract from the general atmosphere but rather adds colour to it. Throughout the record there's a sense of a very organic nature, perhaps a little bit too organic at times although thankfully the shifting of mood saves it from becoming too stale. Overall it's an adventurous record with a strong concept but I feel some of the tracks could have afforded to be shortened a tad for there probably isn't enough musical versatility to keep one fully entertained for the entire duration of the album. Luckily, however, the production is smooth and there's a fine sense of balance and togetherness in what the group manages to exhibit. -Jaime Regadas